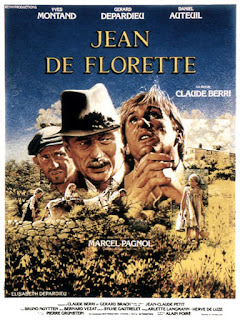 The French Provence, early 20th Century. Ugolin is a peasant who wants to grow flowers in order to sell them to the florist in town, but he needs land with a good water source for it. His friend, the old Papet, sees a chance to help him when their old neighbor dies and his land is inherited by his sister's son, the hunchback Jean from the city. Ugolin and Papet plot to ruin Jean and his family, a wife and daughter, in order to cheaply buy off the land: first they cement the water source, leaving Jean dependent on a mule carrying water from downhill. Jean plans a great farm with vegetables and rabbits, yet the drought destroys it. Upon dynamiting a well in order to find a water source, Jean is injured and dies. Ugolin and Papet quickly rush to unblock the source, which is seen by Jean's daughter, Manon.

Part of a wider trend of the French cinema in the 80s to celebrate and promote French culture, habits, regions and mentality, the first part of Claude Berri's duology on greed and land grab, "Jean de Florette" was once an excellent film, but today seems somewhat depleted of its energy, and fairs only as a good, but not great achievement. Interestingly set up (the main protagonist, Jean, appears only some 27 minutes into the film, which gives the story anticipation), equipped with a fine cinematography, great locations in Provence and fabulous performances from Gerard Depardieu up to veteran actor Yves Montand, "Jean de Florette" explores the issues of human selfishness, yet it does so in a very transparent, banal and mundane manner, with obvious "greed is evil" messages that cannot quite carry the overlong running time of 120 minutes. For some reason, it spends too much time on overlong explanations of the characters, and the apex of that is when Jean spends dire 15 minutes to spell everything out to Ugolin, of how he wants to plant vegetables and grow a rabbit farm, which could have been handled better or simply cut. Show, don't tell. The best part is somewhere in the middle of the film, in the "garden-thriller" segment, when Jean, similarly like the heroine in "Places in the Heart", races with time to save his crops in the garden by bringing water before the drought destroys it all, which manages to engage the viewers by presenting a simple peasant's life as a suspense piece. Unfortunately, the rest of film does not manage to engage that much, presenting several moments in overtly melodramatic fashion, whereas the writing is only sporadically inspiring (in the tragic finale, when Papet asks Ugolin why he is crying, the latter replies: "I'm not crying. My eyes are."). A proportionally well made film, though it tends to drag, whereas there is a solid amount of critics who prefer its 2nd part, "Manon des Sources", because it deciphered a much more sly point.