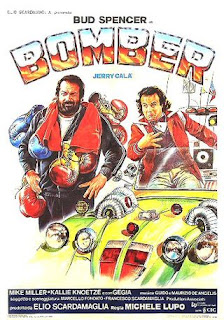 Bud Graziano is a captain who is informed that his ship is confiscated because he owns too much money. On the dock, he saves a man, Jerry, from a group of thugs who were chasing him. Jerry is thankful, and when he hears that Bud is a retired boxing champion, he persuades him to help him train a lad, Girorgio, in order to enter the boxing ring which is always won by Rosco, a Sergeant of an American military base, whose henchmen either bribe rivals to lose or break their hand. Giorgio hears that Bud lost against Rosco in a tournament, but only because Bud's hand was broken the day before. In the final match, when he hears that Girogio's hand was broken, Bud himself enters the ring and beats Rosco.

Five last films directed by Michele Lupo all starred Bud Spencer in them, and his final film, "Bomber", is basically a remake of his first cooperation with Spencer, "They Called Him Bulldozer". "Bomber" offers a rather unusual blend of comedy at the beginning and sports drama in the second half, offering even some more dramatic moments for Spencer (his trainee, Giorgio, even bleeds in the final boxing match and reveals that his hand was broken so that he would lose), yet they are rather heavy handed and seem too similar to "Rocky" - and the viewers would be more invested if Bud would fight himself in the ring, and not just be a trainer (which he does only in the final 5 minutes of the film). Some of the jokes work in the first half (especially when Bud "sneaks in" in the Schuchplattler folk dance to slap Rosco who meddled in among the German dancers), with one even being untypically provocative (Jerry hears that the special code word is "fruitcake", and gets in a lot of trouble when he says it to a man at the wrong gas station, who slaps him), yet they are scarce and far apart, leaving too much empty walk between them that drags or seems routine. A little more ingenuity would have been welcome, since the film lacks highlights and thus cannot give Spencer a chance to truly rise to the occasion, whereas it was unusual that the main bad guy is a Sergeant of an American military base in Italy. A standard, though easily watchable flick, yet with two virtues: the magnificently dreamy opening song "Fantasy" by Oliver Onions is a delight, while wonderfully charming Gegia almost steals the show as the quirky, hyper-energetic girl Susanna who sometimes openly flirts with Bud (the hilarious dance sequence some 20 minutes into the film).