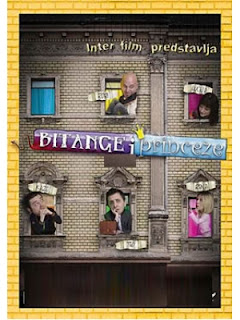 The misadventures of five friends in Zagreb continue. Teo finally gets dismissed from the secret service, Robert Kumerle and Irena Grobnik are still arguing, Lucija is trying to find a job, Kazo finds a girlfriend on his birthday during a "Casablanca" themed party while the "Boss" still cannot bring his marketing agency to work. Several events appear, such as the Croatian-Slovene war and the decision of Robert and Irene to film their own TV soap opera. Finally, the "Boss" feigns to have died in order to escape his debt and starts a new life with a new identity.

The 5th and final season of the popular Croatian comedy series "Bums and Princesses" offers a sudden and somewhat incomplete ending, yet a one that overall stays true to its daft humor and crazy style to offer enough to please the viewers. Unpretentious and fun, the story is a 'hit-and-miss' affair – some episodes are weak, yet when they get inspired, they truly deliver a few brilliant examples of humor. Certainly, a solid level of understanding of the Croatian history and mentality need to be understood to get a few jokes, yet some are of universal appeal. One of the episodes with the highest audacity for a concept are 5.6 and 5.7 that follow a fictional Croat-Slovene war over a small island on the Sutla river on the border (which ends in futility, anyway, when the water washes away the small chunk of the disputed piece of land after the rain), featuring several cynical jokes (a Serb observer (Rene Bitorajac playing a Serb double of his Robert Kumerle character) constantly wants the Croatian soldiers to commit a war crime so that he can report them to the UN, as a revenge for the 90s war, yet they persistently refuse to be mean and instead even make good friends with the Slovene population; the standard Croatian joke at the expense of Slovenia's size, joking that "parachuters would be useless, since they cannot land in such a small country, they miss and always land in Austria").

This offers a further good joke in the follow-up episode, 5.8, when the "Boss" is suspected of committing a war crime during the war, so he shamelessly orders Kazo to organize a protest of nationalists – ostensibly to fight for the "dignity of Croatian veterans", but in reality to save his own skin – with several hilarious allusions to Croatia's strained cooperation with the ICTY ("We are here to stop the foreign powers meddling into our affairs! Robert Kumerle is not a war criminal, he is a hero!", says a fake patriot Kazo on TV, whereas one of the slogans among the crowd in the background says: "Buy here!"). Other jokes are just plain innocent and funny (in episode 5.11, Kazo imagines that he was awarded with an Oscar for his documentary, outwinning even Michael Moore for his movie "The Spice Boss", and then goes on the stage – only to say "What are you laughing at?" to Morgan Freeman (!) in the crowd; in 5.14, one agent of the secret police cannot find a handkerchief in his office, and thus takes a napkin from the state files – which has a map of Tudman's plan to divide Bosnia with Milosevic (!) drawn on it...). And at least one episode advanced into a small jewel, 5.18, titled "Kazoblanca": throughout all previous seasons, Kazo always openly admitted his love for the movie "Casablanca", and here the screenwriters gave him his finest hour when they placed him inside the story of his dream, a one that basically mirrors all the plot points of "Casablanca" (Kazo meets a girl, falls in love, but finds out she already has a relationship with an underground nationalist emigre, Čedo) – everything works in this small chef-d'œuvre, and it ends with Kazo ditching the girl to go to a concert all by himself because, through his own admission, he knew she would leave him anyway, so he left her first so that he could "at least once do something cool in his life", thereby even fairing better than Bogart's character in the classic film: what a king! Actors Tarik Filipovic and Natasa Dangubic are the weak links here, yet Hrvoje Keckes, Rene Bitorajac and Mila Elegovic are simply fantastic, and thus – despite a lack of pathos or loyalty among the five friends – "Bums and Princesses" manages to end on a high note, a whole class above many other Croatian comedy shows at that time.