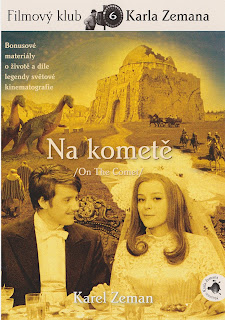 Northern Africa, 19th century. A French army unit is fighting an Arab rebellion against the colonialism, which is supported by the Spanish army. Hector Servadac, a French cartographer, falls off a cliff into the sea and is saved by a girl, Angelica, in whom he falls in love with. However, just then, a giant comet appears on the sky. There is an explosion, and buildings fly off, but fall down again. The French and Arab armies continue to fight, until they encounter Dinosaurs and spot Mars on the sky. They realize that their strip of land has somehow been catapulted on the surface of the travelling comet. Angelica is kidnapped by her brother, but Hector finds her again. When the Earth is seen on the sky, there is another explosion. Hector wakes up near the shore - it was a dream.

An adaptation of Jules Verne's novel "Hector Servedac", Karel Zeman's fantasy adventure is an appropriately opulent and imaginative little film, where he once again demonstrated his audacity to conjure up his very own picturesque worlds outside the big budget system of Hollywood. A small gem of Czech cinema, Zeman is an author with a simple, good old school narrative enriched with an fantastic story - in this edition, a strip of African land with its people was catapulted on a comet - and further enriched with an distinctive, artificial set design, which pretty much immediately identifies his vision, reminiscent of artificial movie worlds of T. Burton, T. Gilliam or J. Švankmajer - the imagery alone is exquisite (in one scene, the soldiers spot Earth on the sky, and one comically adds: "...I can see France!"). "On the Comet" is a light fun, with rather thin character development (including the meagre love story between Hector and Angelica) as well as a unsatisfying ending, yet it has that innocent charm and crazy enthusiasm that simply melts you away. At around 37 minutes into the film, dinosaurs show up, and while they do not last for longer than 2 minutes, they feature several amusing moments, such as they just wag their tales when the army shoots cannons in front of them or start a comedy-stampede when they hear pots in a waggon led by horses. More impressive in its look and visual effects than in its characters or emotions, "On the Comet" is still a remarkable adventure film of pure class.