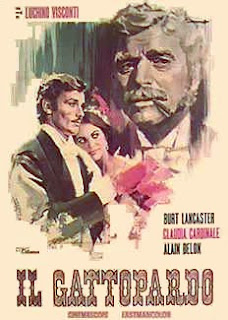 Sicily, 1860. Count Don Fabrizio Salina observes how the country is changing with the appearance of Giuseppe Garibaldi and his followers, who initiate the end of the Kingdom of the Two Sicilies, and turn it part of a unified Italy. Fabrizio's nephew Tancredi also joins the revolution. This also signals the end of Aristocracy. He meets the new mayor, Sedara. When Tancredi proposes Angelica, Serdara's daughter, in an opportunistic move to gain more influence, Fabrizio accepts that, which sadens his own daughter, Concetta, who loved Tancredi. A man begs Fabrizio to join the Senate and help guide the country, but Fabrizio refuses. At a great ball, Fabrizio dances with Angelica and then leaves, walking by foot into the dark of the alley.

Set during the historical backdrop of Risorgimento, i.e. the Italian unification in 1860s, Luchino Visconti's "The Leopard" is a highly ambitious, beautifully filmed and decorated movie which enjoys a high reputation, yet a one that is overrated: one cannot shake away the impression that all the opulence and glamour in it is just a camouflage for the fact that not much happens in the peculiarly uneventful storyline. Just like in many art-films, "The Leopard" has no typical arc in which the protagonist has a goal he pursues throughout the entire film, instead depending on quiet 'slice-of-life' moments, from the comical opening act in which the people's prayer in a room is disrupted by a loud arguing of a man outside up to the famous 45-minute sequence of the ball and dinning in the finale, yet the problem is that Fabrizio Salina is a very passive character, whereas all others are just extras, anyway. There is a strange 'art intertia' in the story, aggravated further by the dated filming technique of static wide shots.

Burt Lancester is great as Salina, giving several strong lines that have a point (in one comical sequence, he confesses to a priest that he is annoyed by the too religious nature of his wife: "What to say about a woman who, whenever I would embrace her, would make the sign of the cross, and whenever she would reach the point of getting excited, she would always yell: 'Jesus and Mary!' Seven children came this way! Seven children! And I've never even seen her naval!" In another moment, he ponders how the people of Sicily would "never admit to a be living in poverty because their vanity prevents them to admitting to themselves that they are not perfect"), and his fate of ageing mirrors the slow change of his country as well, signalling an end to his life (Aristocracy) and a beginning of a new era in Italian society. Sadly, the movie simply lacks highlights, featuring too much empty walk in the overlong running time of 3 hours: what, for instance, was the point of the prolonged 45-minute sequence of the ball, without any confrontation or resolution, when the movie might as well have ended without it? What was the function of the character of Count Carviaghi (Terence Hill) who appears some halfway into the film, only to not play any role in the story? Unfortunately, Visconti is more preoccupied with giving a dry history lesson of his Italian homeland than he is with making this story and characters truly engaging in order to make them come to life for the viewers.