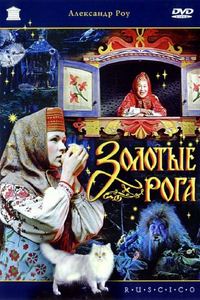 Yevdokia is a widowed mother of three children, Mashenka, Dashenka and Kiryushka, who lives in a small village. One day, sisters Mashenka and Dashenka wonder too far away into the woods in search for mushrooms, and encounter witch Baba Yaga, who transforms them into does and chains them as the punishment for touching her giant mushroom. Yevdokia thus goes to search for her kids all alone in the woods, accompanied only by her dog. She sends a couple of hunters the other way and thereby saves the life of a deer with golden horns that gives her a magic ring and advises her where to search for her kids. When even Kiryushka gets transformed into a goat and captured, Yevdokia transforms into a knight and battles Baba Yaga with a sword. The kids are saved and transformed back, while the forest creatures send Baba Yaga and her cottage into the swamp.

This film adaptation of a popular fairy tale revolving around the witch Baba Yanga is an appropriately colorful, fun, comical, harmless, honest, good natured and opulent fantasy film that was rather well received by the audiences in Europe and gained cult status. Unlike many other children's films, "The Golden Horns" actually took a lot of effort into conjuring up this idyllic world: from the costumes of the witch, her make up giving her a "blue skin", the inventive special effects of when mother Yevdokia is standing on a cliff and talking to the Sun and later on the Moon, up to some unusual ideas and details (the walking cottage), a lot was done to make the production stand out, despite a limited budget. The deer with the golden horns is somewhat clumsily (and scarcely) placed into the scene, since it was obviously difficult to direct such an wild animal in the story, and thus sometimes seems as if he is "in a different film", running away or just looking left and right, yet other than that, director Viktor Makarov has a sympathy for the animals, giving extensive, cute little shots of them in the forest (a little duck, birds, rabbits, squirrel), and sometimes even manages to "insert" them with a function in the story (in one comic moment, when Yevdokia is fighting Yaga with a sword, the cat "swings" her paw randomly, as is she is imagining to be "fighting" herself). Georgiy Millyar is good as Baba Yaga, as are other actors, including Riasa Ryazanova, even though her character of the Yevdokia too often takes a back seat compared to Yaga, leaving her a rather thin character, yet for a children's film, "The Golden Horns" still seem actual and charming today.