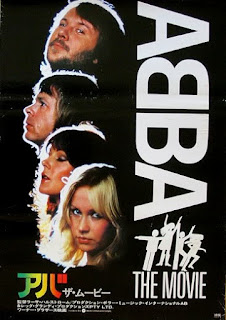 The famous Swedish pop group ABBA is arriving to Australia to go on a tour and the fans are ecstatic. A reporter is sent to make an interview with the four singers for a radio show, but he never has the luck to meet them. ABBA travels from Sydney through Perth to Melbourne, but the reporter constantly fails to get in touch with them, since their bodyguard or other reporters always push him away. He thus makes interviews with other people about ABBA. Finally, just as he was about to give up, he accidentally enters an elevator with ABBA in it, and thus manages to assemble an interview for the radio.

"ABBA: The Movie" is basically a concert film that chronicles the 1977 grand tour of the famous Swedish group in Australia, just like "Woodstock" was a legitimate record of the mood and feel of the eponymous music festival. It shows the whole array of songs performed by ABBA on stage, yet it also features an "addendum" intercut with those scenes in the form of a subplot of a reporter who wants to interview the group, which thus leaves the film somewhat torn between two clashing sides: a documentary and a narrative feature film. Depending on the viewers' preference, and especially if they are ABBA fans, they will either more or less enjoy the movie, yet, just like all those promotional films about the Beatles, "ABBA" is also just a relaxed fun that manages to capture the feel and mood of the group, as well as their hype, embodied in scenes of sensational cheer of fans who literally want to jump over a fence to touch them. The movie should not be regarded as a movie in the strict sense of the term, but more as an audio-visual jukebox featuring ABBA's songs that go directly into the viewers' ears, from "Mama Mia!" up to "S.O.S.", with a few moments that manage to "align" into the narrative, such as the scene where the reporter cannot enter the concert because he cannot buy a ticket since he forgot his money, which is then ironically followed with a segment of ABBA singing "Money, Money, Money". A few scenes are also comical, such as the interview with two 12-year old girls: one of them says she thinks one ABBA singer is "sexy", and then repeats again that he is "sexy", upon which the other girl puts a hand on her mouth.