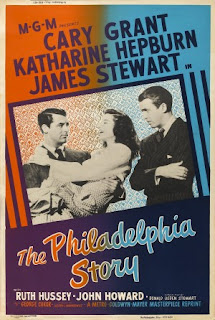 Philadelphia. Tracy Lord, a rich and wealthy girl, quickly divorced her husband, yacht designer C. K. Dexter Haven. Two years later, she is about to get married for the second time, to a rich tycoon, George. Kid, the editor of the spy magazine, wants to have an exclusive story about the top secret wedding, and thus sends his two reporters, Macauley Connor and Liz, to go there - with Dexter as a ploy to get them in. Dexter indeed manages to persuade Tracy to let the reporters in, since Kid has a compromising story about Tracy's father cheating on his wife. However, Dexter is still in love with Tracy, while the situation is further complicated when Macauley falls in love with Tracy as well. After getting drunk with Macauley, Tracy ends her engagement with George - but instead decides to go on with the wedding, with Dexter again as her husband.

One of George Cukor's most famous and critically recognized films, "The Philadelphia Story" is a classic from the 'golden age' of Hollywood — and the last of the four films starring Katherine Hepburn-Cary Grant, but unlike their previous collaboration, "Bringing Up Baby", this one is not such a wild or crazy 'screwball comedy' as much as it is introverted and very measured. A rare film exploration of Philadelphia's upper class and nobility, the story pokes fun at their expense with delight (in one sequence near the begining, reporters Macauley and Liz look in awe at the vast rooms in the mansion of the Lords, with her joking that she "lost her compass" and him adding that they are in the "South-Southwest living room"), but what is most interesting is that screenwriter Donald Ogden Stewart uses their world to explore the nuances of Tracy's character: she is at first snobbish, conceited and too perfect, but slowly changes when she learns to accept her imperfect side. The whole story is basically a thought experiment in which Tracy has to choose between three potential husbands: Macauley and George love her the way she is, but she is attracted to her ex-husband Dexter precisely because he points out that she lacks something ("You'll never be a first class human being or a first class woman until you've learned to have some regard for human frailty. It's a pity your foot won't slip a little sometime."), and thus inspires her to be a better person. Her jump into the pool almost seems like a "resurrection" of character.

The screenplay is remarkably well written, dense and rich with an almost neverending array of juicy quotes ("To hardly know him is to know him well."; when the 14-year old Dinah is being taken away by her mother from uncle Willie who is flirting with Liz, she says: "I can say there is something going on, because I'm being taken away..."; near the opening act, Macauley openly admits he doesn't like his boss, Kid, in his office. Upon that, Kid asks Liz: "Do you hate me, too?", and she, afraid for her job, nervously replies: "...I can't afford to hate anyone!"), some of which are said so fast that the viewers will have to probably watch the film twice to get them all or risk missing important plot points needed for understanding the latter case of the storyline, whereas it is cleverly set up during the night before the wedding. "Philadelphia Story" becomes a clash between two opposing views, the conservative-uptight (Tracy) and the liberal-relaxed (Dexter), which gives room even to other characters, especially Macauley, who works as a reporter in a sensationalistic tabloid, but is privately a poet with a soul, which is delivered beautifully in the scene where Tracy reads his book in the library ("I can't make you out at all now..."- "Really? I thought I was easy". - "So did I. But you're not. You talk so big and tough, and then you write like this."). All the actors are great, as well, from James Stewart up to Virginia Weidler who almost steals the show as Tracy's 14-year old sister. However, the film has two flaws which might inhibit certain people from enjoying it: first off, it is schematic, which sometimes sounds as if it lacks energy; and secondly, it focuses too much on Macauley at the expense of Dexter, when compared to the actual ending and with whom Tracy actually ends up at the wedding. Macauley was given undue weight, since, after his romantic interaction with Tracy, Dexter almost seems superfluous, which seems rather inconsistent and incompatible in the finale.