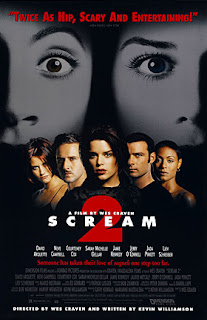 A year after the infamous events in Woodsboro, a studio released a movie called "Stab" in cinemas depicting the murders, much to the annoyance of Sidney, who survived that carnage. However, when two people are murdered during the screening of the film by a man wearing the same mask as the first killer, the local authorities sound the alarm and put Sidney under the protection of two agents. She gets help by news reporter Gale and deputy sheriff Dewey, as well as her new boyfriend, Derek. The chase culminates on the stage of a play, where the killer is revealed to be Mickey, her friend, who teamed up with Billy Loomis' mom, who wants to take revenge against Sidney for her dead son. However, they are saved by Cotton, who kills the two killers.

This expressly assembled sequel, released only a year after "Scream", is one of those rare sequels that justify their existence, offering another round of ironic metafilm playing with the cliches and conventions of the horror film genre: already the opening proves this when an African-American couple goes to the cinemas to watch the fictional horror film "Stab", but the girl, Maureen, complains to her boyfriend that the "horror genre is historical for excluding the African-American community", only to have the "honor" to be "included" in the film when they become the first victims of the masked killer. Wes Craven and screenwriter Kevin Williamson have a field day in this story, cleverly poking fun at the genre and its inconsistencies (while watching "Stab" in the cinemas, Maureen publicly laments at the girl endlessly talking to the killer on the phone: "Just hang up the phone, girl!"; Tori Spelling plays Sidney in the film, even though Sidney hated that idea in the original...), as well as pointing out the bizarreness of commercial exploitation of such murders for the masses as a form of movie entertainment, probably inherent to some urges for thrills and excitement among some viewers of the horror genre. This culminates in a philosophical, 'tour-de-force' metafilm sequence during the film class debate, where the students and the professor are debating whether sequels can surpass the original film, or whether violence on film can motivate violence in real life. Neve Campbell and Courtney Cox are again great in this edition, but the final third of the film loses its energy, and its murder scenes are again too explicit and banal, which somewhat reduces the overall enjoyment value. A highlight, though, is surprisingly a very romantic sequence: the one where Derek sings "I Think I Love You!" in front of the entire class for Sidney is so honestly sweet and cute that it melts you away, which proves that "Scream 2" works on much more levels than some would admit it.