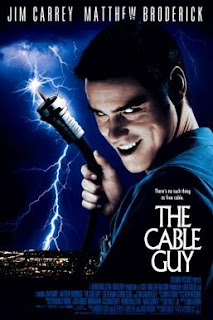 Steven has just been dumped by his girlfriend, Robin, and decides to thus treat himself with cable TV. However, the cable guy, Chip, starts to like him and wants them to be friends. Steven at first obliges, and goes together with Chip to the medieval times restaurant or has a karaoke night with him. However, Chip proves to be highly sociopathic, paying a prostitute to sleep with Steven without the latter knowing it, or playing basketball violently. When Steven decides to "break up" with him, Chip gets him arrested and fired. When he kidnaps Robin, Steven saves her, while Chip jumps from the tower onto a giant satellite dish, but survives.

As some critics already pointed out, "The Cable Guy" is a strange blend between "What About Bob?" and "Cape Fear". But these "annoying friend that won't go away" movies always walk a dangerous, fine line between the tolerable and the intolerable, and while "Bob" and the similar "A Pain in the Ass" work because they are done just right, with a lot of sense for measure, "The Cable Guy" loses its measure fairly quickly, delivering a misguided result, definitely a step back compared to Ben Stiller's 1st film as a director, "Reality Bites". The film actually starts out good, with a clever, long zoom out from Steven flipping through TV channels, as he nervously awaits the cable operator, who is late, lamenting on the phone: "He said he would be here somewhere between 8AM and my death." The cable operator's first appearance is also promising, amounting to a few sly lines ("I am kind of a prefectionist"). Unfortunately, already some 30 minutes into the film the story abandons any kind of effort and instead just queues one lame joke after another — what's so funny about Chip beating up a guy who was dating Robin on the toilet? What's so funny about the disastrous sequence where Chip forces Steven to play the guessing game with his mother featuring such words as "vagina" and "nipple"? What was the point of the running gag of Stiller playing a celebrity on trial on TV, when it doesn't contribute to the story in any way? A movie can recover after a few false notes, but when these false note sequences actually form a majority in the film, it inevitably sinks. A major detriment is also the annoying performance of Chip, since Jim Carrey, for some reason, plays him with lingering grimaces, forced humor and drawn-out antics. In contrast, Matthew Broderick is much better, delivering a very sympathetic and stoic performance as the likable Steven. A small cameo by Janeane Garofalo as the cynical waitress is a small delight, as well. Overall, "The Cable Guy" is like a truth-or-dare game: you chose the dare option, and then regret it for as long as it lasts.