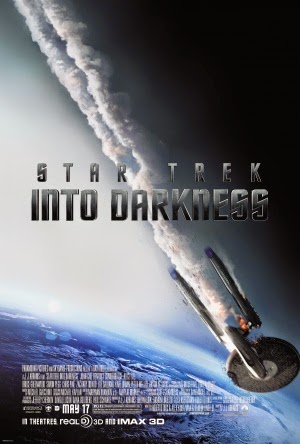 In the 23rd century, a terrorist attack kills Admiral Pike. The perpetrator is identified as "John Harrison", who fled to safety of the Klingon world Chronos, and thus Captain Kirk, Mr. Spock, Uhura, Scott and the rest of the USS Enterprise crew are sent to capture him in a top secret mission, since such a breach into the Klingon Empire may trigger a war with the Federation. They succeed, but "Harrison" is actually Khan, a genetically engineered super-human warrior from the past, who was used by the war obsessed Admiral Marcus to design secret weapons and militarise the Federation. Marcus thus attacks the Enterprise, in order to conceal that information. Luckily, Spock manages to capture Khan and save the spaceship from falling onto Earth.

Untypically, it seems the old rule that the "Star Trek" movies with odd numbers are weaker than the ones with the even number applies even in the reboot franchise, since part II, "Star Trek Into Darkness", is a surprising improvement compared to the overhyped first film. Not only does the crew seem to be getting a hang of it, since the old chemistry of the classic Enterprise crew is igniting, but the story has much more common sense compared to the preposterous time travel plot holes of the 1st film, since it speaks about some political themes and even touches about the notion of the military-industrial complex of the Federation, and the slightly annoying "hip" 21st century modernization of the franchize is restrained, though it has a few setbacks as well (the unecessary scene where it is implied Kirk had a threesome, for instance). Leaving the pointless opening on the planet Nibiru (!) aside, the narrative is so much more normal here, and steadily raises the level of suspense. It takes the story from "Star Trek II: Wrath of Khan", and re-structures it into a new story, where only the ending seems like a rehash of the '82 film. Benedict Cumberbatch may not be as natural and genuine Khan as R. Montalban, but he has his moments, whereas there are even a few examples of inventive action ideas in the "Star Trek" Universe, and two stand out the most: the sequence where Enterprise is flying at Warp speed, until Admiral Marcus' spaceship catches up at them from behind, and opens fire at them in the Warp tunnel, which was unheard off; and the wonderful sequence where Kirk and Khan are flying in spacesuits from the Enterprise to Marcus' ship, and - almost as a two in one - Scott opens the door for them to enter, and causes a pressure drop which sucks out a bad guy, aiming his phaser at him, into space at the same time. As strange as it was to show a relationship between Spock and Uhura, it actually helped to develop that character better, whereas Leonard Nimony once again has a small, but effective cameo as the original Spock, his last one ever. Overall, better than "Star Trek I", but still not quite as good as "Wrath of Khan".