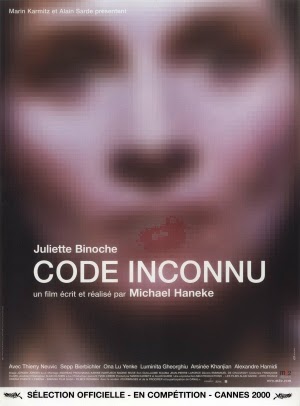 Actress Anne just completed her new film, "The Collector", a thriller. Her lover, Georges, a war photographer, went to Kosovo, and she is visited by his little brother Jean, who wants to stay at their apartment since he does not want to live and work in his grandfathers farm. Anne gives him the key to their apartment, but the angry Jean throws a piece of paper to the lap of a woman who is begging on the street: he thus gets confronted by an African lad, Amadou. The police intervenes, and as a consequence both are arrested, while the woman who was begging turns out to be an illegal migrant and is thus sent back to Romania. Anne thinks she overheard a man abusing a child in the neihgborhood, and confronts Georges about it: he does not want to get involved into other people's business, yet they decide to have a baby.

"Code Unknown" starts off with a brilliant 7-minute scene filmmed in one long take that engages the viewers and "warms up" for the film: in it, Anne (excellent Juliette Binoche) encounters the younger brother of her boyfriend, Jean, and they walk from left to right on the street. However, just as she leaves the frame, Jean starts going back the alley from right to left, and throws a piece of paper in the lap of a beggar's woman, which causes a heroic reaction from an African lad Amadou, who confronts him for humiliating that woman and demands Jean to appologize to her. As in the previous scene, where mute children are trying to decipher what a child is trying to say on stage, this scene also shows the dual nature of the storyline, where a lot of things turn out different than we previously expected: the police don't just arrest Jean, but Amadou as well, whereas the beggar's woman, Maria, actually gets the worst deal, since it turns out she is an illegal migrant and has to return to Romania. It is remarkable how director Michael Haneke manages to grip the viewers so fast and simple - and equally remarkable how he is able to lose them, failing to follow up with the potential of the opening. Namely, instead of building up on what happened next, Haneke just queues random scene after scene, which all do not connect in any way, until the viewers are fed up with the episodic vignettes and give up on the film. For instance, Maria returns to Romania, and we follow her talk with her family and on a wedding, etc., since Haneke does not know what to do with that subplot, he is lost with it. The same goes for Amadou: what happened to him after his heroic stance for the weak? Nothing. He goes on a date with a girl, participates in a drumming contest, but what does any of this have to do with the narrative of the film? Nothing. There are echoes of racism, poverty, illegal migrants, passivity of the upper class and rural-urban relationships, but each one of them is a stub. Ironically, just as the title says, the film is a collection of incomplete tales, and thus we get here five underdeveloped stories which are more appropriate for a first draft than a finished script with a clear storyline and a point, despite well directed scenes.