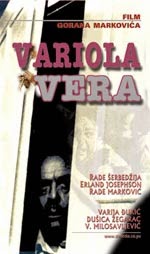 A Yugoslav Muslim makes a pilgrimage to an Arab country, and buys a flute infected with smallpox. As he returns to Yugoslavia, to Belgrade, he becomes sick, but is misdiagnosed with an penicillin allergy in the hospital. When he dies and the test results show he died of smallpox, the alarm bells go off: the authorities seal off the entire hospital, with some 200 patients and doctors inside, in order to prevent a mass epidemic in Europe. A doctor from the UN shows up in the hospital, covered with a white protective suit, and helps the medical staff take care of the infected and evacuate the remaining healthy patients to another floor. A librarian who fell in love with a nurse enters the hospital and is found dead on the roof - but he died from sunburn. After a month, the disease has been eradicated thanks to vaccination, and the hospital is unsealed.

The 1972 Yugoslav smallpox outbreak, the last case of a smallpox epidemic in Europe's history, made for quite an interesting and suspenseful story-dramatization in "Variola vera", a film made only a decade after these events. Director Goran Markovic seems to insert a few inappropriate 'horror' elements in the storyline, yet except for the first patient - who is seen throwing up blood and leaving a bloody trail all over the walls of the hospital - it luckily did not show too many explicit or crude details, instead focusing more on the conditions of the hospital staff that was sealed off by the authorities and turned into a quarantine zone (a patient complains to the doctors that he cannot leave the hospital, even though he just checked in that day, and is thus "stuck" with the rest of them; a doctor is accused off secretly stealing medicine since there are not enough vaccination packages; the authorities are informed about the newspaper reports from the West, which proclaimed them the "defenders" of Europe from a smallpox epidemics, which causes an even bigger burden on their shoulders...). Unfortunately, the story is overlong and the characters are too episodic to truly stand out and develop into real protagonists: ironically, the most memorable of them all is the UN epidemiologist, whose face is - except for the final scene - never seen since he carries a white suit and protective mask, but whose wisdom and calm helps alleviate the tension in the hospital a lot. A too bland and standard, yet still engaging Yugoslav forerunner to "Outbreak", with a few good paranoia moments.