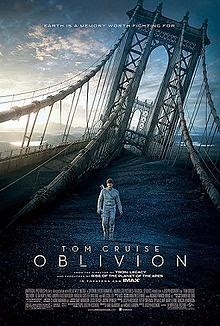 In 2077, Jack and Victoria have been told that their memory was erased to cope with the tragedy of a an alien invasion of Earth, which resulted in aliens leaving but the Moon being destroyed. They are told their mission is to repair droids who protect giant stations that suck ice and water from Earth in order convert them into energy for all the humanity which has left for Titan, since Earth is contaminated by radiation. Little by little, Jack starts deducting this is not the case: the surface aliens turn out to be humans. One of the survivors, Julia, turns out to be his wife. Jack is namely a clone of the original Jack, an astronaut who was brainwashed by the aliens on the space station Tet. The energy stations are actually aliens' and they are destroying the remains of Earth, feigning to be ignorant, Jack arrives at the Tet station and detonates a nuclear bomb, thereby destroying them and saving Earth,

Compared to many other big budget Hollywood Sci-Fi films, where everything revolves only around mindless action, Joseph Kosinski's "Oblivion" is a step forward since it dared to be unusual and different from the standard, yet still not enough to edge itself into brilliance. A lot of its strong points derive from a huge plot twist in the second half, which is indeed original and strong, and therefor one cannot dissect it too much without revealing many of its clues - sufficient to say that it is a sly allegory on the autocratic tendency to restrict information in order to get only an 'abridged' vision of reality - yet a couple of images are expressionistic as well (the semi-shattered Moon, flattened like a pancake, seen on the night sky; the post-apocalyptic scene of the iconic San Francisco bridge buried half way by sand). However, the storyline is sadly sterile, grey, humorless and lifeless, which undermines the characters to truly come to life. As much as Tom Cruise gives a good performance, it is way too serious and standard than his funny, humble and warm performance as Jerry Maguire, where he was so much more genuine. Morgan Freeman is great as always, yet his character is too 'abridged' as well to fully engage. This is particularly noticeable when one has in mind that Michael Arndt co-wrote the screenplay, yet his witty and comical sparks obvious in his previous films ("Little Miss Sunshine", "Toy Story 3") are not here. However, it flows smoothly and elegantly, whereas the finale is a real stunner.