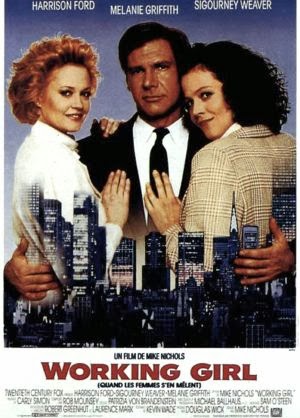 Working girl Tess McGill finds a new job as a secretary of a powerful New York business woman, Katherine Parker. One day, Tess has an excellent business idea, about how a client, Trask, could covertly slip into the media by first acquiring a popular radio network, and Katherine accepts it, but in order to gain fame, she decides to steal it and present it as her own idea. When Katherine breaks a leg during a ski incident, Tess takes charge of her office for a few weeks and decides to execute her idea herself. She meets executive Jack and they fall in love while trying to convince Trask to do the deal. When Katherine returns, she tries to convince Trask that Tess stole her idea, but in the end, Tess prevails.

Even though it was popular at the Golden Globes and Oscars, by today, romantic comedy "Working Girl" failed to reach the status of a classic, but it is one of those charmingly dated films from the 80s. That amusing business comedy made in the vein of American films of 30s and 40s, but with a very palpable touch to the modern society and several small erotic moments, is well made, and thanks to it, Melanie Griffith became a star: casting her might have seemed like an untypical choice at first, but she really made Tess a realistic, fragile and sweet character, a one who conveys the sense of living under her possibilities. The highlight of the film are refreshing feminist touches (Tess is blond, yet clever; her boss is also a woman...), but the flaws are apparent: kitsch, several forced or staged scenes, occasional banal humor and too simplistic approach at times. "Working Girl" has some brilliant bits (mostly involving Joan Cusack's character Cynthia, who says: "I sometimes sing in underwear, but that doesn't make me Madonna, and it never will" and in another scene pretends to be Tess' secretary, thus suddenly smiling for a quick second behind Jack's back before he turns away to look at her), yet they are isolated and never quite form a unified feel for the movie as a whole. However, one should not criticize too much, since the movie has a soul. It is too light to rival Wilder's "The Apartment", except on one field that surpasses it, Carly Simon's magical song "Let the River Run" that really has to be heard for its sheer harmony and pathos.