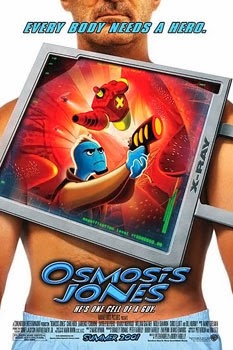 Frank, an employee in a Zoo, is a real anti-hypochondriac who only eats fast food. When his daughter Shane tells him that monkeys at least eat healthy vegetables, unlike him, Frank replies with: "They only eat vegetables because they are too dumb to slaughter a cow." One day, after eating a dirty egg from the floor, Frank is contracted with virus Thrax. White blood cell Osmosis Jones and cold pill Drax try to capture Thrax, even though nobody believes them that the virus even exists and the mayor of the body is only interested in elections. When Thrax steals the DNA from the hypothalamus gland, Frank falls into a coma. Still, Thrax falls into alcohol and is destroyed, whereas Osmosis and the DNA returns in Shane's tear back to Frank abd saves him.

A very unique retelling of the French animated TV show "Il etait une fois...la vie" on acid - showed here in a satirical version - unusual comedy "Osmosis Jones" was not a box office hit, yet gained cult status for its sheer originality that depicts the human body as a small, complex country inhabited by microorganisms who try to protect it, a world of its own. The story revolves around the animated world of the white blood cell from the title in the body of his "master" Frank (Bill Murray in a role full of sardonic stoicism) which gives a whole double context to that deceivingly light looking, yet in reality quite creative comedy and intelligent vulgarity, whereas one of the animation directors is Tom Sito (the director of the '83 "He-Man"). The originality sprouts on numerous places that depict the structure of the body, and are even (abstractly) educational at times: the subtitles "Mouth, 12:30 PM" are spelt like one of those crime films; Frank's body resembles a giant spherical town and is called "Downtown Frank. Population: 78,889,293,834,872,302,829,297,438"; on a poster, his butt is called the land "Down Under"; a monument to a sperm has a plaque saying: "Our founder"; the police stations are, of course, the lymphatic system, whereas there are even a few metaphysical touches here, such as when the mayor holds a session in the brain while Frank is sleeping, or when Osmosis Jones goes to the cinema to watch Frank's dreams from the subconscious. The live action part of the film is indeed not half as fun or inspiring as the animated part (the zit sequence is the weakest link), but as a whole, despite a few failed moments, this is a contagious fun and is simply clever - and a big warning of what unhealthy fast food does to the body.