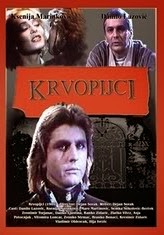 Psychiatrist Dr. Franz Golgowecz is very surprised when a stranger, Teobold Majer, visits his home at 1 AM and claims to be a vampire who cannot drop by his office during day. Before Teobold leaves, he says that Franz's last name comes from a family who used hawthornes to kill vampires. Franz at first thinks the man is crazy, but after researching in the library, he finds out that a certain Teobold Majer indeed existed in the 16th century. Franz is visited by his uncle and his son, Jambrek and Jurek, while Teobold shows up during night to try to seduce his wife, Barbara. A woman pays Franz 2,000 DEM to stab her relative, Drakulić, in the graveyard, supposedly a vampire, and Franz is arrested and sent to a mental asylum, but released when the police themselves start questioning if Drakulić is a vampire.

In the Yugoslav cinema, where the fantasy and Sci-fi genres were very neglected, even a cliched vampire story seems like a refreshing and welcomed surprise, if anything, then at least by pure default. Dejan Sorak tries to keep the storyline together in "Bloodsuckers", but it collapses fairly quickly since it is never clear what the story is about, where it is headed or what it wants to say - obvious in the abrupt ending that leaves the viewers feeling as if the real ending was suddenly "stolen" - and even in the genre definition, it flip-flops between a pure horror and a parody. Such a blend of genres worked in "An American Werewolf in London" and "Evil Dead II", since it was a welcome shift between moods - from pure scares to relaxing humor - but here, those two seem to be in a collision. The locations in the Upper Zagreb are aesthetic and the neat lighting during night scenes gives the story a certain charm, yet that is pretty much it. Maybe the film would have worked better as a short, or if it revolved around the two comical supporting characters, Jambrek and Jurek, who act almost as Abbot and Costello at a couple of moments and tip the film into a parody ("Hi, I am your uncle." - "Sorry, but my father did not have a brother." - "Of course he didn't." - "I don't understand." - "He was ashamed of me, so he never mentioned me. Nice to meet you!"), especially since they just want to catch Teobold sneaking at the window of Franz's wife at night to "keep him during the day, to show that he is not a vampire, but just an ordinary fucker".