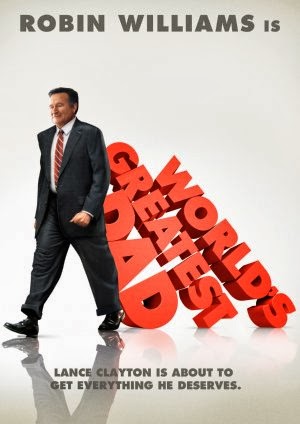 Lance tried to be a writer all his life, but each and every one of his novels were rejected by publishers. Working as an English teacher, he feels alienated from his son Kyle, a mean, rude and unpopular teenager, and even senses that his secret relationship with teacher Claire is about to fall apart. One evening, Lance is shocked to find his son dead, who accidentally strangled himself while masturbating. In order to cover that up, Lance makes it look like Kyle committed suicide and writes a fake suicide note. But when the note is leaked on the internet, the whole class suddenly think Kyle was a misunderstood genius and poet, so Lance uses the hype to sell his book as Kyle's writing. Still, uneasy with using his dead son as a ploy to gain fame, he admits everything.

"World's Greatest Dad" is a rare black comedy with taste and measure, which gives a few good satirical jabs at the nature of hype and herd mentality. The opening shots describe Lance (very good Robin Williams) as one of those artists who feel like they are living 'below their potential', since he cannot sell a single novel no matter how good he is, and even his private life suffers because of it (his love interest Claire seems to be more and more attracted to Mike who announced how his story was published in the New Yorker). The main tangle, in which Lance is exploiting his son's death to climb up in the hierarchy and publish his own novels under Kyle's name, gives the movie spark and is engaging. It is a tiny bit inconclusive (for instance, would Heather really become such a fan of Kyle's after his death since he once told her she is a whore?) yet the main theme works in several directions, commercial, psychological (Lance knows he can now publish anything disguising it as Kyle's due to the sympathy of the people, similar as certain books that can never get a bad review, such as the Holocaust literature or biographies of victims) and even religious (nobody knew Kyle's real personality except Lance, his "messenger"). The message is that people need ideals, even fake ones, in order to function, which makes this a very unusual retelling of "Being There", and also has quite a good choice of music, especially the very impressive Bruce Hornsby's song "Shadow Hand". The story could have been executed in an even more comical fashion, yet overall, it is one of Williams most underrated films in the second phase of his career.