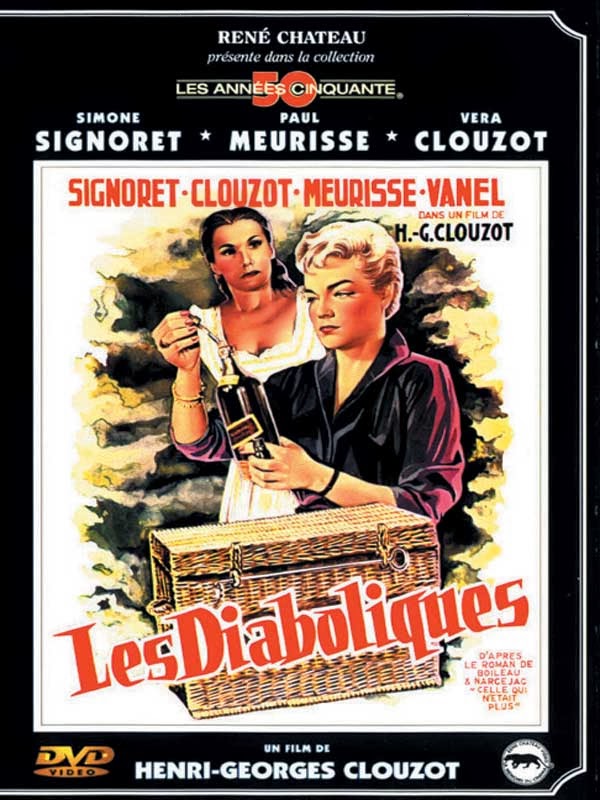 Christine is a rich, timid woman married to a mean-spirited principal of a boy's school, Michel, who humiliates her when ever he can. He has an affair with one of the teachers there, blond Nicole, who is Christine's friend. The religious Christine refuses to divorce, but accepts Nicole's plan to lure Michel to a vacation resort, tranquillize and then drown him in the bathtub. The next day, the two women put his corpse in a luggage and drive off back to school, throwing Michel into the pool. However, his corpse sinks and won't float up again. When the pool is drained, the corpse is gone. Christine is in panic, while an inspector questions her since Michel is gone for a week now. Finally, Michel shows up one night and Christine dies from a heart attack: he double-crossed her with Nicole. Still, the inspector arrests Michel and Nicole.

Excellent thriller "Diabolique" once again demonstrated how director Henri-Georges Clouzot is able to reach Hitchcockian levels of suspense drained from everyday citizens. The story starts slow, almost as a typical French social drama in school, but slowly yet surely takes a different tour to the crime area in the main tangle where the two women decide to kill the husband of one of them, Michel. The sole murder, drowning in the bathtub, is deceivingly smooth and simple, since the real 'juice' of the story is what follows next, a puzzling, intriguing second half where the corpse is missing and the two (anti)heroines try to figure out what happened. Clouzot uses the typical formula of anticipation and prolonging of a tight event to enhance the suspense, as he did in the splendid sequence where Christine cannot wait until the corpse finally resurfaces in the pool, yet is shocked when the school kids accidentally drop their ball in the water and cannot reach it. The film doesn't reach the intensity of Clouzot's best film, "Wages of Fear", and is slightly overstretched, yet when the staggering twist ending sets in - one of the most virtuoso ones in the cinema of the 20th century - all the scenes and events that seemed questionable before, suddenly align into a harmonious whole and fit "just right", and the puzzle is completed down to a T, in a simply brilliant payoff. Truly a great classic, and one of the finest thrillers of the 50s. It won the New York Film Critics Circle Award for best foreign film.