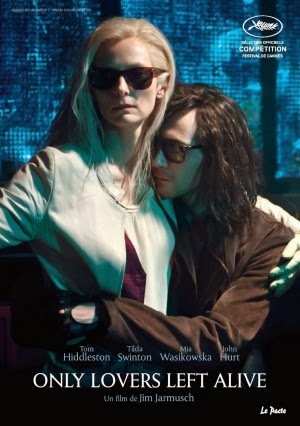 Adam and Eve are centuries old vampires living in the modern world. Adam is in Detroit, trying to write underground songs, but increasingly feeling empty and depressed with his life. His wife Eve arrives from Tangier to visit and cheer him up. Her sister, Ava, drops by uninvited and kills Adam's assistant, supplier Ian. Adam and Eve thus banish her from his home, dispose of the corpse and flee to Tangier. However, Eve's friend, vampire Marlowe, dies because the blood there is contaminated. Adam and Eve thus have no choice but to attack a random couple to survive.

Anti-"Twlight" - Jim Jarmusch takes the stereotype plot of vampires and twists the cliches - similarly like he did in twisting the western cliches in "Dead Man" and the lone assassin cliches in "Ghost Dog" - thus delivering an unorthodox film where the vampire couple is presented in a "washed out" edition, bored with their existence, which also gives a quiet layer of existentialism. However, that twisting of the cliches was not exploited to the fullest and lacks inspiration or energy to develop into something more. As always, Jarmusch presents his minimalist style reminiscent of Ozu as well as a few welcomed, fresh jokes (Eve uses the refrigerator to make a blood popsicle (!); the triple montage of Adam, Eve and Marlowe experiencing a drug hallucination state after drinking blood) and a few subversive jabs at society by setting the story in Detroit, devastate economically and empty, thus a fine symbol for the protagonists' sense of lack of any perspective. The actors are also fine, especially Tilda Swinton and the always brilliant John Hurt. "Only Lovers Left Alive" is an interesting vampire film, yet, despite numerous interesting scenes, it is somehow anaemic at times.