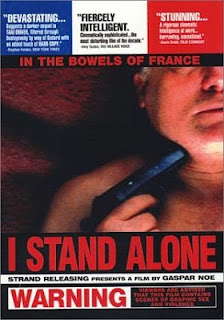 A nameless Butcher was born. He beats up the person who tried to seduce his mentally retarded daughter Cynthia and is released from prison only after he turned over 50. He hits his pregnant mistress in the stomach after she provoked him and runs away to Paris in fear from the police. He sleeps with a prostitute, runs out of money and is convinced that life is meaningless. After the Butcher gets insulted in a bar, he decides to kill himself and his daughter with a gun, but changes his mind and becomes happy with her.

Explosive-energetic thriller-drama "I Stand Alone" is some sort of French answer to US "Taxi Driver" from '74, turning into one of those examples of "shock cinema" that isn't for everyone, yet director Gaspar Noe colored the story with amazing stylistic interventions. For instance, a text shows up on the screen in the exposition saying: "You are watching a movie about the fight of one man against social injustice", followed by a 2 minute long queue of images narrated by the anti-hero: "This is the life of a butcher. That man is me." It's a dark irony that the brute Butcher is allowed to kill animals since it is "socially acceptable", his job even, but when he turns his aggression against humans, he gets punished. One of the most inventive ideas is when a text shows up on the screen, saying: "Warning! You have 30 seconds to stop watching the film!", followed by the Butcher imagining to kill himself and his daughter; surprisingly, very little violence is actually shown on film, but the shot composition, huge close ups and dynamic editing create suspense "out of nothing", a tight mood that radiates fear even when the Butcher just looks into the camera, which is why the film is never boring and it even offers an unusual "happy end" where he throws away his depression.