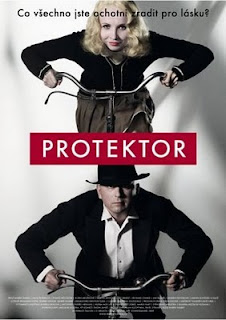 Hana is an aspiring Czech-Jewish actress shooting a film in Prague, married to reporter Emil. After the Nazis invade Czechoslovakia and annex Czechia to the Third Reich, Hana has to hide in the apartment while Emil works as the voice of the radio, now pursuing propaganda. After SS general Reinhard Heydrich dies from an assassin on a bicycle, Emil is seen driving to work with one. He refuses to announce a statement on the radio and joins his Hana who is deported with other Jews from the city.

"Protector" is a solid film about the Holocaust nightmare in Czechia during World War II, though with a small reservation - it would have been more significant if it was made 50 years ago. Since there are thousands of films that already documented almost every aspect of that period, "Protector" doesn't add anything new to the genre whereas Marek Najbrt's direction is competent, though routine and conventional. The two stand-out aspects of the film are the catchy music and the excellent performance by Jana Plodkova as Hana, a character who is a typical victim in the (predictable) storyline, untypically humorless for the shrill Czech cinema. There is one sequence that is great, though - when Hana, despite being Jewish, daringly exits to the street wearing a blond wig, and mischievously let's a friend take photos of her standing in front of dozens of stores and buildings with a sign that says: "Forbidden for Jews". Her sweet teasing is wonderfully ironic, and somehow one can't but feel as if that moment of a strong heroine would have made a far better and fresher film than the standard, but solid edition we got.

Great review. From you review I actually found this movie an interesting one. The concept seems to me so nice that I am looking forward to see it soon. Thanks for writing up such a good review and making it available for all.
Protektor Online