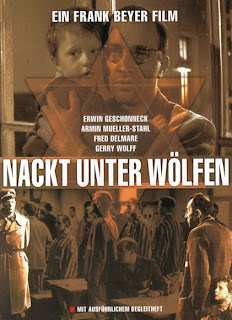 The final days of World War II. Prisoners in the Buchenwald concentration camp hear the rumors that the Soviets are marching from the East, while the Americans are marching from the West, passing Rhine river. A Polish prisoner smuggles a little Jewish boy, born in Auschwitz, in the camp, while prisoners Höfel and Kropinski promise to take care of him and hide it, even though he is a burden for the prisoners who plan a rebellion. A Nazi commander discovers the boy, but decides to let him live, hoping it will assure him a bonus after the American victory. However, the other Nazi officers have no mercy and start searching for the boy, torturing Höfel and Kropinski. In April, the commanders start evacuations of the camp. Just then, the rebellion starts and frees numerous prisoners.

An extremely brave and honest film, "Naked Among Wolves" is a dark adaptation of the biographical novel with the same name by Bruno Apitz, who personally spent 8 years in the Buchenwald concentration camp. Director Frank Beyer crafts the film as an allegory of integrity and humanity, though he let's it seem more as a "prison film" than a "detention camp film", with sometimes scarce examples of horror - one of the few truly scary moments, except for the main tangle where a little boy spent his whole life in camps, is when the prisoners are fighting to get a bowl of food or the interesting observation of conversations of the camp commanders who question whether they should kill the prisoners or let them live, knowing the advancing American army will inevitably held them responsible after the war - which dilutes the dark mood, but only slightly. All the actors are in top-notch shape, especially Armin-Mueller Stahl, whereas the set-design conjured up a realistic and chilling feeling of the camp. The film may be slightly overstretched and lax at times, yet it is a valuable document of self-admittance, an intelligent, ambitious and complex piece of cinema.