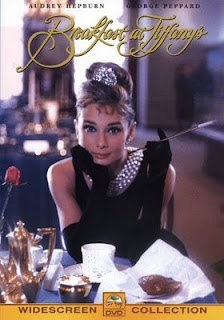 New York. Holly Golightly, a young partygirl who pays her rent by going out or hanging out with gentlemen who give her money, meets an aspiring writer, Paul Varjak, who moves in just in the apartment above her. Paul instantly likes her, but is increasingly appalled by her lifestyle, since she openly admits that she wants to marry only a rich man. He finds out she has divorced in Texas and left a movie agent just a day before she was about to make a film. Holly intends to marry a tycoon from Rio De Janeiro, but due to a scandal he leaves her, fearing for his reputation. Just as she was about to leave anyway, she returns and falls for Paul.

One of Blake Edwards' better films, a loose adaptation of Truman Capote's novel with the same title, "Breakfast at Tiffany's" is still a charming humorous drama about two outsiders who find their way together that, despite some rough edges in the minority—Mickey Rooney's portrait of the Asian landlord that borders on heavy caricature and seems more like Cato from "The Pink Panther" series, an occasional corny dialogue, occasionally stiff performance by actor George Peppard—has a lot of things going for it in the majority and thus gave Audrey Hepburn the most recognizable role of her career, for which she was nominated for an Oscar and a Golden Globe as best actress. When Edwards isn't trying to force (banal) humor into the film (at a party, Holly's cigarette accidentally puts some lady's hat on fire; a drunk madam is talking with herself in the mirror...), he shows a surprisingly emotional and honest sense for its two sad heroes. As a matter of fact, he even hints at a small socially critical note aimed at social hierarchy based on money.

It has been widely debated at what exactly Holly's "profession" really is, ranging from that she is a prostitute up to that she is only a partygirl; the first doesn't seem that far fetched since such harsh themes were only possible in a milder version in the 60s, and there is a great little sequence where Holly exits from her bathroom window, away from her date, a drunk man who is pounding on the door, and walks the stairs up to spot Paul sleeping in his bed, while his "mistress", an older, rich lady, leaves him some money. Some saw symbolism in it, though in the end the story leans more towards  that Holly is actually a "gold digger" who is nearing older age—and thus also nearing the end of her good looks, forcing her to choose whether to settle and marry someone who is rich or someone whom she loves. Hollywood happy endings are often too contrived and "too safe", but this is one rare example where no other ending would have suited the film better than here: besides a fantastic little line ("I'm in love with you." - "So what?" - "So what...? So plenty!"), it has a fantastic romantic spark —just imagine that the cat is a symbol for Holly's humanity - then pay attention what happens when she kicks it out of the taxi—whereas the song "Moon River" by Henry Mancini is simply perfect.