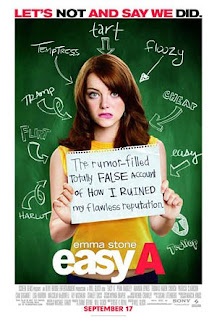 Teenager Olive is a virgin, but since she lied to her friend Rhiannon that she was on a date, she expands that fabrication and boasts that she lost her virginity last weekend. Unfortunately, the conversation was heard by gossip girl Marianne. Quickly, the rumors spread through high school that Olive is an "easy girl". A gay guy, Brandon, persuades her to pretend they slept with each other at a party, to get rid of his gay rumors, but that starts a whole chain of unattractive guys paying her to pretend they slept with her to boost their reputation. When a counselor resorts place Olive as a scapegoat in order to cover that she cheated on her husband, teacher Griffith, Olive finally tells the truth and ends up with the kind Todd.

A refreshingly pleasant surprise, romantic teenage comedy "Easy A" is a humorous modern 'upside down' retelling of "The Scarlet Letter" combined with humanitarian 'voluntary tramp rumors'. The screenplay by Bert V. Royal tells a lot about a society believing every rumor and its ever tricky handling of sexuality, while also offering a few dialogues so genius and so juicy it's a treat. For instance, heroine Olive says this to the Christian fanatic girl Marianne: "We've had nine classes together since Kindergarten...Ten if you count Religion of Other Cultures, which you didn't because you called it science-fiction." Likewise, Will Gluck's direction is refreshingly considerate, kind-spirited and affectionate towards his imperfect characters, the story is full of clever references at 80s movies (a hopelessly romantic Olive even narrates: "I want Judd Nelson thrusting his fist into the air because he knows he got me!") whereas the opening credits - with the letters of the titles placed on the ground of the high school yard - are very inventive. Last but not least, Emma Stone is simply smashing in the leading role and carries the film even with an occasionally less inspired moment, though the excellent Thomas Haden Church should also be mentioned as the charismatic teacher Griffith. Maybe the film does tend to lose steam towards the end and maybe it's not so deep, yet it has charm and at least one great romantic line delivered by Todd ("I wish you really were my first kiss").