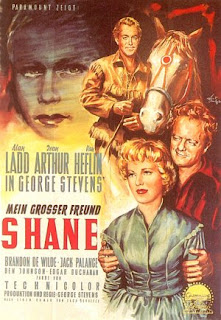 Joe, his wife Marian and their son joey live in an isolated cottage somewhere in the American West in the 19th Century. The mysterious Shane rides by their farm and decides to stay for a while when he spots that they are terrorized by the rich Ryker who wants their land for his cattle. Joe finds a place for Shane in his house while he helps them around the farm in return. But Ryker hires killer Wilson who kills one farmer. Joe decides to have a showdown with him, but Shane stops him and decides to take that burden for him. In a duel, Shane kills Ryker and Wilson and leaves the farm wounded.

Fairy like western "Shane", that depicts the ever sweet archetype theme of a hero who shows up from nowhere and helps the weak in trouble, is a flawlessly crafted jewel that transcends its genre and has universal appeal. George Stevens, the director of the 3 hour long drama "Giant", rightfully concluded that the bitter story should be directed in a sweet and elevated-dignified way, the "old school way", which is why "Shane" was nominated for 6 Oscars and won one for cinematography. The exposition skilfully sets-up the tangle: bad guy Ryker shows up with five thugs at Joe's farm in order to tell him that the land belongs to him, while he replies with: "Do you need so many men to tell me that?" Later on, the bad guys tease and provoke Shane in a saloon by spilling a drink on his clothes, but he tactically does not react which is why many farmers criticize him and call him a coward, whereas only the little Joey says: "I don't believe Shane would allow something like that to himself!" while his mother tries to distract his attention ("I haven't read you the story until the end"). The film is filled with such great, innocent and pure little details and lines throughout, whereas Jack Palance is great as the bad guy, but Alan Ladd is still the main star as the idealistic title hero. A shining film that only lacks a few "provocative" theories according to which Shane was in love with Joey's mother and even died in the open ending, as stated in the film "The Negotiator".