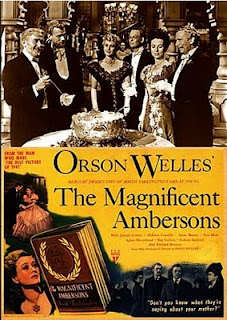 Indianapolis at the end of the 19th Century. The Ambersons are a rich and distinguished family, consisting among others out of Major Amberson and his daughter Isabel. The middle-class Eugene Morgan is in love with Isabel, but she turns him down to marry someone from a rich family, Wilbur Minafer. Since she doesn’t really love him, she directs all her attention to their son George, who becomes a spoiled brat. As a lad in his 20s, George meets and falls in love with Lucy, Eugene’s daughter. When Wilbur suddenly dies, Eugene and Isabel, now both widowed, start becoming intimate again. But George forbids his mother to marry Eugene. Forcing to choose between them, she decides to leave the town with George. Returning back after a long time, Isabel dies while the Ambsersons start going bankrupt with the arrival of industrial age. For the first time in his life, George decides to find himself a job and take responsibility. He gets injured in a car accident and begs Eugene for forgiveness, who ends up with Isabel’s sister, Fanny.

Orson Welles’ second feature length film, “The Magnificent Ambsersons” is an unjustifiably forgotten jewel, a brilliantly directed and conceptualized adaptation of the novel with the same title. Despite a rather slow start, the story quickly becomes surprisingly addictive thanks to Welles’ kinetic, energetic visual style that films normal scenes with engaging power as well as the sole story that features some human problems, relations and observations posed that seem fresh even today: Can a rich girl leave her poor boyfriend to marry a rich man she doesn’t love? Can a mother spoil her child too much? Can a spoiled young lad forbid his widowed mother to marry someone? Can that same lad live his whole life without having to work? Can a poor family increase her fortune and surpass the declining rich family? These are some really hot topics that seem easily recognizable and the viewer can identify with them.

Aside from some small humorous touches (young Eugene knocks on the door of the Ambersons to see Isabel, but the butler says: “Sorry, Mr. Morgan, Isabel isn’t here for you!”) the drama shines with moments of wisdom (Euegene’s monologue that the new machines inevitably cause a “subtle change in the human mind”; his letter regarding the spoiled George that among others speaks of experience with age, stating “40 cannot tell that to 20. 20 must go to 40 to understand it”; Major Ambserson dwelling in “the most profound thinking of his life” contemplating about the meaninglessness of his money and reputation) whereas Welles also shows his inventive touch here and there, like in the finale where the closing credits are spoken by an off-screen voice and not shown printed onscreen (!). At least 2/5 of the movie is a masterwork, despite the obvious struggle with the drastic cuts made by the meddling studio and the forced-abrupt happy ending.