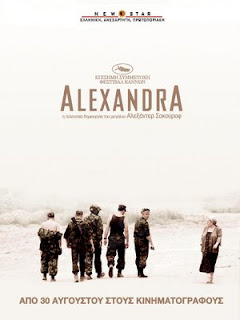 The middle aged Alexandra arrives with a military train to a Russian outpost in Chechnya to visit her 27-year old grandson Denis. She is a stubborn old lady annoyed by the heat, casually walking from one tent to another. After a while, she goes to a local market and meets an old lady who becomes her friend. With time, she becomes aware how neither the Russian soldiers like to be there nor do the locals. Finally, she leaves the outpost on a train.

There's a funny old saying that can be used quite often to describe a certain type of story: "Martin to Zagreb, Martin out of Zagreb". It can be applied to Aleksandr Sokurov's drama "Alexandra" that is nicely made, but basically isn't much more than the grandmother visiting her grandson in an outpost, grandmother leaving the outpost. Sokurov here bravely tackled the taboo subject of the shameful Russian oppression of the small Chechnya (and whole of Caucasus for that matter), but only indirectly, through an occasional dialogue that can be interpreted two ways, whereas there is not a single scene of fired guns or combat, which is why it seems that we only got just small crumbs from a real 'cake'. Galina Vishnevskaya is great in the leading role whereas the director used a minimalistic style and maximum babble, present in too much talking which only occasionally hits a remarkable note ("The suffering is always eternal"). A hermetic film that will be interpreted as ambitious and subtle by some and boring and lax by the others. Still, it was nominated for the Golden Palm in Cannes.