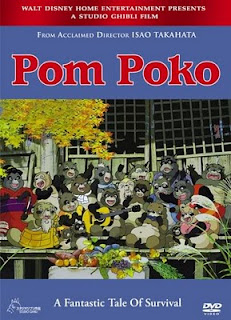 Tanuki - Japanese 'raccoon dogs' - are facing to become refugees since humans have decided to spread Tokyo city by creating a new suburb on their green hill. However, the tanuki have the ability of shape-shifting, which is why they have decided to use their talent to pretend to be ghosts and scare humans away. Their group is divided between those who just want to scare people away and those more radical ones who want to kill them. After creating a giant ghost parade, they are shocked to find out people think it was all just a promotion trick for a amusement park. The suburb is built and the tanuki adapt by transforming into humans, while a smaller group stays in nature.

One of studio Ghibli's lesser films, Isao Takahata's 9th movie feature, "Pom Poko" is a strange anime fantasy comedy that was hailed by one part of the audience and objurgated by the other, yet it still achieved cult status. In this film Takahata picked the humorous Japanese legend that the tanuki - Japanese 'raccoon dogs' - have the ability of shape-shifting, and mixed it with noble ecological messages in the story where they start a marathon war with humans to save their green hill from concrete. Basically, by re-telling the plot from the animated TV show "The Raccoons" in a more opulent way, Takahata showed the whole event from the 'raccoon dogs' perspective, which is why the animation is very good, but it depicts the animal characters in caricature way. The first part is the best, overwhelming with funny and inventive shape-shifting jokes: in order to trick a truck driver, a tanuki transforms into a bridge and dodges off just in time to reveal a huge abyss on the road in which the truck falls into; after they heard the truck driver died, the tanuki decide to be 'noble' and pay their enemy a minute of silence, but already after 10 seconds they start to giggle before erupting into laughter; two tanuki transform into a man and a woman to 'practice' infiltrating the human city, but the man exhausts himself and turns back into a tanuki on the street, causing the woman to react quickly and place it over her neck to disguise it as her fur scarf... Unfortunately, the second part exhausted itself (especially in the grotesque ghost parade) and the story started to get burdened by overstuffed events in overlong 120 minutes of running time, which is why the ending seems sincere, but also welcomed to finally put a full stop.