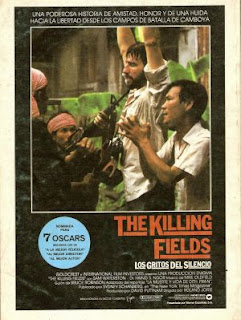 Cambodia in the late 1 9 7 0s. The opulent reporter Sydney enters the country in order to report about the takeover of the state by Pol Pot and his pseudo-Communist Khmer Rouge. He meets colleague Al and native journalist Dith Pran who becomes his assistant. Sydney and Pran illegally cross to the town Neak Leung that was bombed by the US by mistake. They get arrested by the Khmer Rouge but manage to escape. Due to the regime change, the situation in Cambodia is increasingly becoming unstable, so all the foreigners start to massively leave the country, including Sydney and Al, but the government doesn't want to let go of Pran. Years later, Sydney tries to find him and bring him to the US. He finally succeeds when Pran escapes from a prison.

Exceptionally bitter and realistic anti-war drama "The Killing Fields", the feature length directorial debut film by director Roland Joffe, placed the spotlight on the rarely talked about hard line pseudo-Communist regime Khmer Rouge that was, according to some estimates, responsible for the death of at least 740,000 people in the Cambodian genocide, since it depicted the story based on true events of a friendship between reporters Sydney Schanberg and Dith Pran, gaining critical acclaim and winning several awards. The first part of the film that depicts the horrors of war is the best. In one amazing scene, Sydney and Al are sitting on the table and casually talking, while all of a sudden an explosion erupts just a couple of yards behind them and knocks them off to the floor: such a sudden and suggestive apparition of "action" is rare, while there are also many other shocking scenes that constitute the mood and theme of the film. Lizards are crawling on the wall of the hotel. A cow urinates from fear due to an explosion in town. The Khmer Rouge detain three American reporters and provoke them by offering them Coca-Cola while killing all other prisoners. The second part of the film doesn't function that masterfully anymore because it only depicts reporter Pran in captivity, causing an imbalance since he suddenly became the main protagonist, while the character of Sydney disappears. Pran's escape lasts for almost an hour and is terribly overstretched instead of being compact, which is why the film lost some of its grip, yet the last sequence featuring the song "Imagine" by John Lennon is simply perfect.