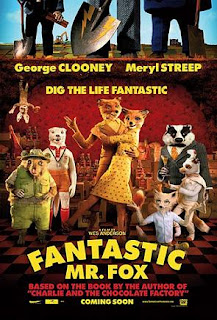 Mr. Fox and his wife Felicity decide to stop their risky chicken stealing from farmers after she finds out she is pregnant. Years later, Fox is annoyed by his stiff job as a newspaper columnist so he decides to buy a new house in a tree, which is conveniently located near three human farms. Quickly, he and Kylie, an opossum, start stealing chickens again. At the same time, his son Ash is jealous of his nephew Kristofferson who visits them. As an angry backlash, the three farmers start a siege of Fox's home so his family digs they way out. They save Kristofferson and return to live in a sever.

After his previous two films marked a slightly exhaustive tone, director Wes Anderson returned back in top-notch shape with his first animated film, the stop-motion flick "Fantastic Mr. Fox", an unusual departure to a different genre. Contrary to many expectations, Anderson actually proved to have a lot of inspiration in adapting Roald Dahl's book with the same title, also blending such a difficult and slow animation process effortlessly with his style, most noticeably in insisting on crafting great shot compositions and a polished visual style. Some of the most amazing, irresistibly charming and completely untypical moments for Anderson appear precisely in the characters acting 'cartoonish', like in the inventive opening where Fox and his wife Felicity go around the farm and skilfully hide behind walls and clothes or when they are digging in somehow inexplicably sympathetic way. The idea that the bad guy, the human farmer Bean, wears Fox's tail as a tie is clever whereas the scene where Fox and Kylie are storming a farm, appear on every of the five monitors one after another, it's obvious they are stealing chickens, but the guard doesn't notice them because he has turned around, is genius. Some minor criticism could be pointed at Anderson's typical 'gibberish' jokes, an occasional 'autistic' dialogue, some small omissions and a rather lax final 20 minutes, but as a whole "Fantastic Mr. Fox" turned out refreshingly balanced in combining extravagant stop-motion and innocent story telling.