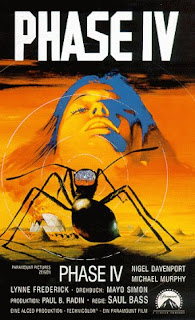 After a space anomaly, ants in Arizona desert start acting peculiarly: they exterminate every other life form and build mysterious sand towers. Doomed insignificant, only scientists James and Ernest are brought to study the phenomenon in a nearby laboratory set in a dome. After the ants even attack a farm and kill a horse and farmers, Kendra, the surviving girl, is brought to the laboratory. The ants infiltrate the laboratory and cut the wires, causing a short circuit, while they also build giant reflecting mirrors that send heat waves to them. Ernest is killed, but when James goes to exterminate the ant queen in a tunnel, he discovers that Kendra has been brainwashed by the insects. Together, they make up with the intelligent ants.

The only feature length film directed by title designer Saul Bass, "Phase IV" is a sly little cult science-fiction film that was undeservedly forgotten with time. Even though the main topic— humans vs. ants—sounds like a cheap horror film, Bass actually manages to make it plausible with ease due to wonderfully aesthetic images and very good shot composition. Even though some scenes ended up heavy handed - like the clumsily edited one where the ants attack a horse, yet nothing is seen but a horse going crazy and the farmer looking nervously—the reason why this film should be appreciated more lies in some unbelievable close up shots of the ants.

From the fast forward scene where tens of thousands of ants attack and decompose a spider, through the one where an ant goes under Kendra's pants up to the virtuoso sequence where ant after ant carries a toxic crumb in a tunnel, dies, then gets replaced by another ant until it is brought to the ant queen who creates a genetically modified species of ants who are resistant to the chemical, every moment of painstaking effort of the authors can be sensed. However, it seems Bass is better at directing ants than humans: the 'kammerspiel' of the three people trapped in the laboratory is good, yet there are too many illogical details and plot holes in it, especially why they wouldn't just run away from the ant-hive. It's hard to conclude if the film would have been more coherent if the producers hadn't deleted the surreal finale, which apparently showed the future on Earth where humans and intelligent ants live together, but the way it is, "Phase IV" is a truly clever, analytical and well made film whose slow gradation of suspense managed to hold the illusion of the story.