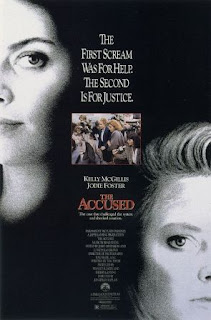 The terrified Sarah runs out from a night club, goes to a police station and reports a rape. After the examination, lawyer Kathryn Murphy and the police go to the night club the next day and arrest three suspects. The trial though becomes complicated for Murphy when it is discovered that Sarah was drunk, drugged and that she seduced one of the perpetrators. The suspects go to prison, but get a mild sentence - which disappoints Sarah. When she meets one of the men who cheered during the rape, she slams into his van with her car. Murphy thus re-starts the trial, but this time she accuses the crowd who cheered during the rape. Witness Ken recognizes them and they land in prison.

Intriguing, brave social engagement drama "The Accused" gathered considerable attention since it was one of the first Hollywood films that talked about rape, but also inserted a subversive theme about an active (perpetrators) and passive rape (the people who cheer and don't help the victim), whereas the splendid Jodie Foster, in the role of the victim, was great and won an Oscar and a Golden Globe as best actress. Director Jonathan Kaplan chose an objective depiction of the story while the mood was crystallized already in the exposition: in it, the night club is at first shown during day, and then during night, until the shocked Sarah storms out, which is why the viewers at first can't be sure if the rape happened or not - that explicit, dark sequence was shown only at the end. The story queues details, from the one where Sarah is surprised when her boyfriend tells her he is annoyed by her moaning, up to the charged trial at the finale. As a message film, it's a proportionally skillful drama with high ambitions and realistic tone, but with a rather lukewarm, standard execution.