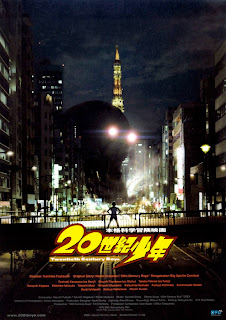 Tokyo 2015: a manga artist is in prison and listens to a story of an inmate: 18 years ago, in '97, Kenji is a guy who works in a store, looks after Kanna, the baby of his sister who ran away, and dreams about his lost career as a rocker. When he was in elementary school, he wrote a "book of prophecies" as a joke, where he "predicted" that an evil organization would take over the world. To his surprise, now all those things really are happening exactly the way he wrote it, word for word: together with his 8 friends, Yukiji, Otcho, Yoshitsune and others, he discovers that an evil organization, F.D.P., led by a mysterious leader called "Friend", found his notebook and decided to realize it. Kenji stops a giant robot on New Years Eve, but it explodes with him.

55 million $ were appointed in 2008 for the simultaneous production of 3 films in a row for the adaptation of the manga "20th Century Boys" by Naoki Urasawa, making it the most expensive film production in Japan til date. The first movie, released in 2008, doesn't justify such an expense though (except maybe for the finale with the 60 foot tall robot/tank wrecking havoc through Tokyo's streets), and it's execution of the story doesn't even justify such hype either. The basic concept, admittedly, is really delicious and you enjoy crunching it down in your mind: what if you wrote, as a joke, a doomsday scenario as a kid, and when you grew up you discover that some organization is actually realizing it exactly the way you wrote it, word for word? The main protagonist Kenji finds himself in that situation, struck in awe that even the above mentioned robot shows up, yet the execution - which some say also follows the manga word for word, while others complain that some good parts are missing - is dry, lax and towards the end starts to drag. It's not so much the fact that the story is too complicated as much that it's too mechanical in it's stiff following of the manga. One of the rare instances of true inspiration is the humorous scene where the government mistakenly thinks that Kenji is a terrorist and is thus hunting him down, so he meets his old friend Otcho in Tokyo by disguising himself - as a pink bunny! The mystery as to who is hiding behind the evasive leader "Friend" also has some formally interesting points, yet it would have been so much better if it all wasn't so formally interesting, but genuinely, really interesting in this overlong 142 minute film.