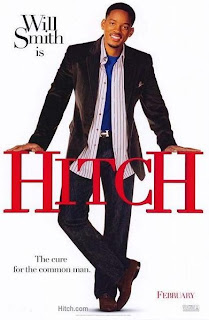 New York. Alex "Hitch" Hitchens is a "date doctor" who works anonymously and without any promotion, since all his clients recommend him to other people. He helps men who are in love with a "perfect" woman, but are insecure to do anything about it. His latest client, the overweight accountant Albert, manages to capture the heart of the rich celebrity Allegra. Yet, at the same time, Hitch himself has problems capturing the heart of Sara, a gossip columnist, who gets infuriated when she finds out that he is the "date doctor", since one of his clients just had a one night stand with her friend. Yet in the end they make up.

A surprisingly well made film about matchmaking, "Hitch" offers a refreshingly humane Will Smith in a sweet and lovable role of the title hero. Screenwriter Kevin Bisch seems to have a very high social intelligence when he wrote some of the situations in his screenplay which are very, very true to life, or at least he made some very insightful observations about male-female relationships. The first 30 minutes of the film are a blast: in the opening montage, the main protagonist narrates: "Basic Principles: no woman wakes up saying "God, I hope I don't get swept off my feet today!" Now, she might say "This is a really bad time for me," or something like "I just need some space," or my personal favorite "I'm really into my career right now." You believe that? Neither does she. You know why? 'Cause she's lying to you, that's why". The film is filled with such and other juicy lines that look as if they were written by a humorous Sophocles, especially when Hitch himself does some flirt stunts, like when he present himself as Sara's "boyfriend" to help her rid herself of some guy who is annoyingly hitting on her in a bar. Kevin James also has a solid role as Hitch's client, and his process of capturing the heart of a woman who doesn't care about him is, despite the fact that it's far fetched, insightful: actually, too many of Hitch's flirt tips are unconvincing. Predictably, though, the inspiration of the film starts to lose power in the middle, while the finale turns out almost terribly cliched and predictable. And then again, at least the whole film didn't turn out that way, but offered a few surprises and sparks here and there.