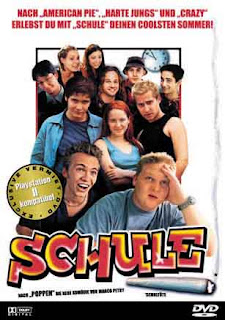 Somewhere in Germany, the teenage Markus wakes up and listens to the radio in shock: his girlfriend Sandra wrote him a love letter and called him "Schnubi" - when the radio anchor reads that aloud, Markus figures that nickname is going to follow him for a long time. He talks with Sandra in school who thinks the nickname is sweet. The school ends in 3 weeks, so Sascha films the last moments with his camera whereas Dirk gets answers for an exam from the unpopular Michael, so he brings him along with his friends for a party at a lake in return. There they all get drunk and flee from two cops. Markus in the end makes up with Sandra.

There's an unwritten rule regarding these kind of films: if you have to make a cheap teen-comedy for the masses, make sure to make it as hilarious as possible so that you can outrun at least some part of the critics. At the start of the film, there's a small surprise: the voice of the radio anchor is spoken by Arne Elsholtz, the famous dubber in many German films and TV shows. Though, he isn't seen in the film, and the same goes for charm of this unfunny and half-hearted comedy, "No More School", that becomes lax due to a slow rhythm. The interesting point is that there is practically no vulgarity here, yet the dramatic moments are fragile: the topics of rape and depression are blended together, and when towards the end the hero holds a pathetic speech on the school radio about how the students are going to be in the future, it becomes clear the story got stuck. Among slightly more funnies moments is the mysterious "whisperer" in the toilette and smoking under the water.