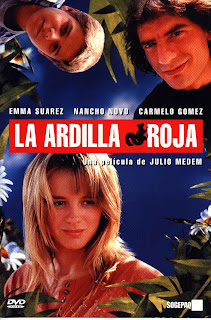 The lonely and unemployed Jota decides to commit suicide by jumping of a platform near the beach. But just at that moment a young girl on a motorcycle loses her control and has an accident. Jota helps her, but when he discovers she got amnesia from her injury, he decides to introduce himself - as her boyfriend. He picks her up from the hospital and brings her along for a motorcycle ride. They settle at the campsite "The Red Squirrel" and make friends with one family. Jota enjoys in romantic adventures with the girl whom he called Lisa, but he then discovers her name is Sophie and that she is running away from her abusive husband. When the husband finds her, she runs away. Jota finds her in a Zoo and she admits him that she never had amnesia in the first place.

Dreamy, twisted, slightly esoteric, somehow detached from any kind of settled genre and somehow understandable only to itself, romantic love drama "The Red Squirrel" is an unusual achievement. On one hand, the original story (a young lad finds a girl with amnesia and introduces himself as her boyfriend) seems magnificent. But on the other hand, it's hard to shake of the impression that the film as a whole could have had a more skillful execution. Julio Medem, a specialist for 'adult romance', enriched the film with inspirational visual style (a man who moves on the photo; a dream about the argument between Jota and Phyliss) and unobtrusive erotic, but as if he kept the relationship between Jota and Lisa deliberately mild. When Jota has intercourse with Lisa the first time, the viewers get the impression he already did it a hundred times, and not that the "sparks" are flying from the beauty of the first time.