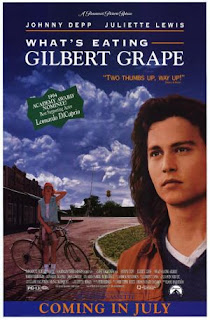 Iowa. The young Gilbert Grape is carrying a big responsibility on his shoulders. His father died, he works in a store and takes care of his mentally handicapped brother Arnie (18) and their obese, 500 pound other Bonnie. He also has an affair with the older and married woman called Betty, a mother of two children. After he falls in love with teenager Becky he starts thinking about getting away from his life. Betty's husband dies while a new supermarket opens in the area. Then Becky leaves and Gilbert's mother dies. He burns down his house, cashes in on the insurance and runs away with his brother.

Unbelievably smooth and proper melodrama carries the intrinsic handwriting by director Lasse Hallstrom: he avoids any kind of commercialization in his films and his unusual-gentle characters are very important to him. "What's Eating Gilbert Grape" truly has a few unusual, almost bizarre characters that seem like some grotesque at first look, like the 500 pound mother or the hero without a will, but a closer look reveals their feelings and let's the viewers know them, which is why they become understandable and seem serious. It's a pity there is no real plot, but the atmosphere is honest and free of kitsch. Maybe some moments could have been handled better, but they way it is, "Gilbert" is a truly fine film, and Hallstrom even avoided the cliche of the mentally handicapped people in movies with Arnie, since Leonardo DiCaprio plays him refreshingly simple and sympathetic, even in scenes where he is screaming from happiness, which is why he was nominated for an Oscar and a Golden Globe as best supporting actor.