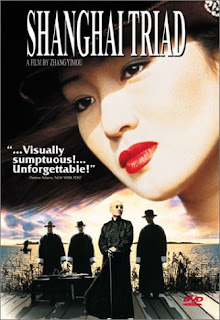 Shanghai, 1 9 3 0s. The 14-year old boy Shui Sheng Tang arrives in town from a village and waits. His uncle picks him up in a truck and he quickly witnesses opium smuggling and murder in a warehouse. But his uncle gets him a job as a servant of singer Jinbao: she is arrogant and cold, but also mistress of a powerful gangster boss, which is why she enjoys numerous privileges. After an assassination, the gangster and his assistants leave to an unknown island and bring Jinbao and Tang with them. She softens up with time towards the kid and also makes friends with a girl of a widow on the island. When Tang overhears a conspiracy on the field, the gangster finds the traitor and kills him together with Jinbao, suspecting her of treason. Tang tries to save her, but fails and is left hanging upside down tied to a ship.

Good and quiet tragic drama "Shanghai Triad" shows the exotic world of gangsters seen from the perspective of the 14-year old boy Tang, limited in a time frame of 7 days, by which it shows their eerie life full of luxury but also danger and constant fear for ones life. Many consider it a parable for the fight for power, but also for friendship between the kid and the attractive singer Jinbao who seems to develop motherly feeling for him towards the end, though while the viewers at the beginning cherish some hopes that they will experience an event, towards the finale it becomes obvious they won't see any miracles here. In this quality film the most original part is the final scene where the camera is placed upside down while even the closing credits are thus rolled backwards, but acclaimed director Zhang Yimou uses the wonderful cinematography only for the beautiful landscapes and almost never to enchant with dialogues, the relationships of the characters or the neat story. The sole tangle really doesn't have that much sparks even though the relationship between the servant kid and singer Jinbao could have been much more interesting since they were wonderfully embodied by Wang Xiao Xiao and Gong Li, Yimou's reoccurring actress. "Triad" was nominated for a Golden Globe (as best foreign language film), the Golden Palm in Cannes and for an Oscar (best cinematography).