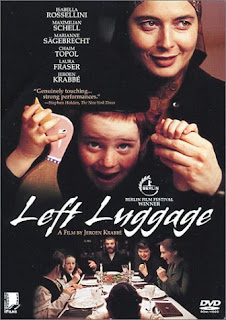 A Jewish family survives the Holocaust in '45 and burries it's luggage. In '72 in Antwerpen lives their cheerful and modern daughter Chaya (20) who studies philosophy and sometimes goes to visit her father and help him search for the luggage. Then she gets a job as a nanny at rich and orthodox Jewish family Kalman. They have 5 children and demand that Chaya wears a dress, not pants, which causes her to quit, but she then changes her mind and returns. Even though the janitor is impolite towards her, Mrs. Kalman tells her not to pay much attention to him. Chaya takes Kalman's little son Simcha for a walk. But then the boy disappears and his corpse is found in the lake. There's a funeral. Chaya goes back to help her father search for the luggage.

"Left Luggage" has a bad reputation for being a pretentious art film that unjustfully won major prizes at the Berlin Film Festival, but all in all it's quite a decent film. Actually, the lost luggage is here just a supporting subplot while the main plot actually revolves around the clash between two worldviews - between the modern girl Chaya and a patriarchal, orthodox family, which is why the film's title should have been "Nanny". Jeroen Krabbe's directorial debut didn't manage to illuminate with full light - there is clumsiness, naiveness and empty walk here, a few times too many to forgive it and it's thin story, but a certain shrillness comes from the happy Laura Fraser's character while an occasional amusing moment here and there manages to break the monotony ("When Kennedy said 'Ich bin ein Berliner' he actually said he is a doughnut"). Too bad it's just a watchable, sentimental lemonade that doesn't offer anything new.