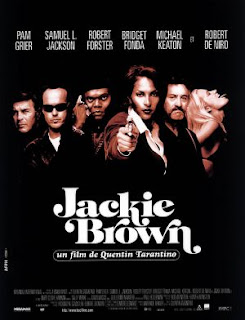 Los Angeles. The 44-year old stewardess Jackie Brown is practically sentenced to a monotone life, working for a measly salary of 16.000 $ a year for an airline. So she is smuggling money to the US for Ordell, up until ATF agent Ray catches her and forces her to bring her boss into a trap so that he can arrest him. Also, bail bondsman Max bails Jackie out of prison and becomes fond of her. In the end, she tricks them both: she tells Ray she will hand over Ordell, and at the same time she tells Ordell she is cheating Ray. She steals half a million $, Ordell kills Louis while Ray kills him. And she gets away, kissing Max before she leaves.

When Quentin Tarantino took three years to make his 3rd film, assembled an all star cast - both stars like Robert De Niro and stars of long forgotten blaxploitation films like Pam Grier - and adapted Elmore Leonard's crime novel "Rum Punch", the expectations were high and many thought he will top the success and hype of his first two films, but in the end the audience didn't find the film that "cool" and it subsequently grossed only modestly at the box office. Still, "Jackie Brown" is excellent, one of those classic, juicy crime films that lean more on details and directorial interventions than on cheap action. Tarantino here introduces long camera shots and in the finale shows the money exchange three times, each time from a perspective of a different character, which is effective despite the fact that it's a trick that has been done already in numerous films. It really seems Tarantino became more mature here: he is able to show such scenes like the one where Ordell and Louis are watching TV clips of women in bikinis promoting guns and make them look original even though they were stolen from "Beverly Hills Cop 3", whereas the mood is contagiously calm - despite violence, the story is much gentler than Tarantino's first two films because this time the main protagonist is a female being. Maybe it's a pity that actors like Michael Keaton and Bridget Fonda are slightly underused, but the story is very smooth while the excellent Robert Forster, who was rightfully nominated for an Oscar as best supporting actor, became the most sympathetic character of the year as Max.