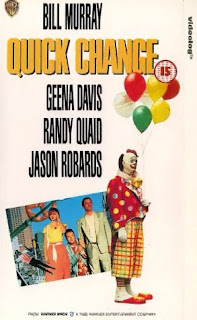 New York. A man disguised as a clown enters a bank in order to rob it and takes all the people as hostages. The police starts a siege of the bank, but the clown turns out to be the clever Grimm who disguises himself with his two associates, Loomis and Phyllis, as hostages and thus manages to successfully get out with the money. But when the 3 robbers want to escape from the city, they encounter numerous problems: there are no traffic signs, they loose their car, a Taxi driver doesn't speak their language, the bus driver is obsessed with rules...Still, they manage to get pass Commissioner Rotzinger and escape in the plane.

Excellent comedy, filled with wonderfully simple ideas that work on all levels, "Quick Change" is a remarkable remake of the '85 film "Hold-Up" that keeps unravelling marvellously until the end. Overwhelmed by Howard Franklin's idea to adapt Jay Cronley's novel, actor Bill Murray decided to direct it himself, which is why this film marked his debut as a director. But, unlike some first-time directors who have troubles crafting their film, Murray impresses both as a director and main star: his every move, line and gesture all tightly display his spot-on comedic talent, from the scene where he spots and reacts to a TV reporter commenting about the clown bank robber ("The clown at whom nobody laughs...") up to the one where he and Phyllis exchange a line because they are irritated by two construction workers who tore down all traffic signs, cant give them any directions and one of them has a beard ("Honey, why don't you shoot them?" - "I can't. They are fur-bearing. I'd need some kind of permit, wouldn't I?"). A highlight is the sequence where Grimm has 1 minute and 40 seconds to get coins with the exact change for a bus trip, while the pressure amounts since the police and a mafia thug all arrive at the scene, culminating in a sequence that reaches both 'Hitchcockian' intensity of suspense and pure comic hilarity. Murray's style is superior comedy, but he also gives room to supporting roles: nobody is just a 'face-in-the-crowd', every little character has a special 'frequency of humor', which overall gives a wide depiction of characters of New York and their mentality. The film is brilliantly complete and crafted, a very solid blend between crime and comedy, equipped with a top-notch rhythm - the message that it is easier to rob a bank than to get out of New York in time is hilarious, whereas it is especially good to spot all the highly energetic performances by the crew. A fantastic fun. And thanks to its intelligence and "honest" humor, it is even slightly better than the similar "A Fish Called Wanda".