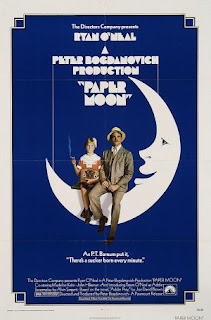 USA during the Great Depression. Moses Pray is a poor loser who knows how to manage in life: he goes from house to house and sells expensive Bibles to widows, claiming they were ordered by their husbands before they died. On the funeral of a former girlfriend, he meets girl Addie (10) who is supposedly his daughter. Due to circumstances, he promises he will bring her to her aunt. But, he quickly discovers that Addie causes sympathy from people who are willing to pay more for their Bible. On their way, Moses picks up easy girl Dixie who exploits him so Addie gets rid of her. New problems appear with aggressive Sheriff who catches them smuggling alcohol. They manage to escape. In the end, she doesn't want to stay at her aunt and remains with Moses.

Bitter-sweet melancholic comedy "Paper Moon" again displays how little it takes to make an interesting film: it is arguably Peter Bogdanovich's finest hour as a director, since he got so much out of so little. It starts in a twisted-comical way: the main protagonist Moses shows up late with his car on the funeral of his ex girlfriend. While he is walking to her coffin, he realizes he came with empty hands - so he just takes flowers from some other grave. The exposition where he unwillingly takes the little girl Addie, reminds a little bit of Fellini's "The Road", and even later on do the parallels show up: the whole story is constructed in the format of a simple road movie where only the two main protagonists are important, while all others are just supporting characters who just enrich the friendship between them.

Despite too much babble at times, Bogdanovich directs the film in a sovereign and confident way, never allowing to turn little Addie into a too sugary character: even though she is only 10, she already smokes (!) and helps cheat people to get their money, like in the scene where she claims she payed 20 $ even though she gave only 5. Tatum O'Neal won an Oscar as best supporting actress for that role, becoming the youngest actress ever to win that award - whether it was a right decision to give the Oscar to her at such a young age and not the screenplay or the director who were much more responsible for the overall quality of the film is a matter of debate, even more so that she won it for supporting actress category when she was clearly the leading actress, yet it is undeniably that she performed her part wonderfully. Bogdanovich's opus oscillates too much, but in the 70s he was a really talented director.