Witness for the Prosecution 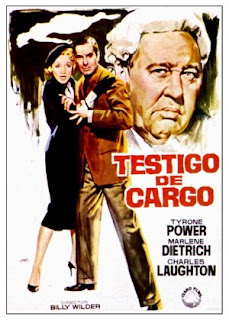 Sir Wilfrid Roberts, genius lawyer called "the Champion of impossible cases", returns to his office after a recovering from a sickness. His nurse Plimsoll constantly reminds him that he must stay in bed, which irritates him. Suddenly his friend storms in and begs him to help him defend Mr. Leonard Vole who made friends with the rich Mrs. French who left him 80.000 pounds, but was found murdered. Wilfrid accepts to defend him, but Vole's wife, German girl Christine, testifies against him in court. But she than masks herself into a stranger and gives Wilfrid some letters that represent her as a liar, thus enabling Vole to be freed of charges. Only later on does Wilfrid realize that Vole really killed Mrs. French, but Christine kills him due to jealousy.

Shining humorous court thriller is brilliantly playful thanks to the sharp directing skills from Billy Wilder and was actually labelled "suspenseful" back in those days even though it is hardly just that by today's standards since it is wonderfully relaxed, calm and clever, thus radiating more with style and humor than cheap suspense. The best roles were given by the fulminating Charles Laughton as the cynical but noble lawyer Wilfrid and the amazing Marlene Dietrich as Christine. All in all, it's a serious story about greed and murder set in the courtroom, but after watching it the comical moments will probably stay the longest in the memories of the viewers: one of the of those quirky scenes is the one where Wilfrid questions Christine while at the same time "flashing" her with the reflection of the Sun on his glasses; when Vole jumps on the bed and the roof collapses and Wilfrid's many sly comments, like when his nurse is ordering him to lie on his bed and he just replies with: "Ah, you just want to see me in my underwear!" The movie is also one of those that offer a twist ending, which comes rather surprising even though it's a little bit banal, while the rhythm is very measured, becoming an unknown classic. Elsa Lanchester even won a Golden Globe as best supporting actress, even though Dietrich was so much better.