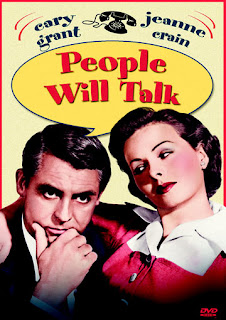 Doctor Noah Praetorius works in a clinic he opened himself. His methods are rather unconventional because they cheer up patients so his jealous colleague Elwell, professor on the school of medicine, hires a detective to research his mysterious past. Noah meets the young Deborah who is unhappy because she is pregnant with a young man who died. After she tries to commit suicide, Noah proposes her and meets her father. But Elwell accuses him in front of a board of review of curing people as a charlatan in his youth. He doesn't succeed and Noah's friend Shunderson, suspect of murder, adds that Elwell is a small man.

Although unknown, "People Will Talk" is an ostentative comedy full of sophisticated grotesque and quirky dialogues, all revolving around a (then) tricky subject, both of the McCarthy era and the "shame" of single pregnant women. The first half is the best since it manages to keep the souls of the characters despite the bizarre situations - in one of those, Dr. Noah looks at a dead corpse of a woman he is supposed to dissect in front of the students on the table, but then starts talking how "this isn't just a bunch of tissue, but a being that once loved". Then Deborah falls unconscious so Noah wakes her up and asks her how does she feel, upon which she says: "Stupid". Especially bizarre is the character of the grey Mr. Shunderson who follows Noah in almost every scene but never says a word! In one of the funny moments, Noah can't enter the yard of a farm due to an angry Collie dog ironically called "Beelzebub", up until Shunderson looks at the animal for so long until it stops barking and leaves. It's a pity the tiresome second half looses a lot of it's steam in only portraying Noah's "mysterious" past, and looses it's original tone, thus finishing rather unevenly.