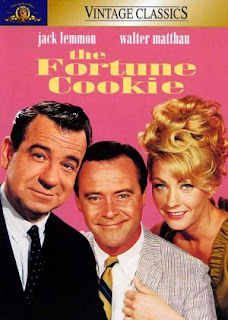 Harry is a TV cameraman who gets accidentally injured by the Black football player 'Boom Boom' Jackson during the game. Harry gets a light concussion, but is otherwise all right, yet his brother-in-law, lawyer Willie, decides to demand 1 million $ from the insurance company in order to get 200.000 $ in the settlement. In order to do so, he persuades Harry to act a heavily paralyzed victim in the wheelchair. While Willie is arguing with the insurance, Jackson is tormented by guilt and takes care of Harry, who is also visited by his ex-wife Sandy. Inspector Purkey on the other hand is filming the apartment in order to reveal the fraud. Harry gets annoyed by all the dishonesty and eventually proves he is healthy, comforting Jackson.

After two unbalanced comedy films, Billy Wilder once again managed to prove he is a full-blooded master of comedy with "The Fortune Cookie", not as much with hilarious humor as with genius idea - it's a strange paradox, but most hilarious comedies are trashy, wild and madly anarchic, something Wilder is simply too intelligent to make. The film marked the first time Walter Matthau and Jack Lemmon worked together and showed they have great chemistry, creating probably the best film about insurance fraud and establishing a secret ode to justice. Matthau, who won an Oscar and was nominated for a Golden Globe as best supporting actor, plays the sly, greedy lawyer Willie brilliantly - in one especially well written sequence, he decides to 'enrich' Harry's injuries by including a one on his spine already damaged in his childhood ("Nobody will know the difference between an old injury and a new one"), and even goes so far to suggest him to play a paralyzed man upon which Harry protests: "I won't even lift a finger to help you!" Willie just replies with: "That's the spirit! Don't even lift you finger!" Among other Wilder trademark gags is the clever one that shows how Harry actually cares about his ex-wife even though he pretends he can't stand her ("She read just one book in her entire life! For 6 months she was stuck on page 19!") while the ending involving the camera spy Purkey is brilliant. Despite a few strenuous moments and a few lame gags, "The Fortune Cookie" is a real classic that shows how comedies should be made, but sadly many directors forgot the recipe.