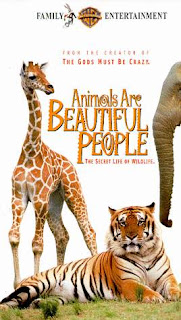 "Some die, while others live". Already in the first scenes of little insects as one of the few inhabitants of the Namib desert does the film show the wonders of nature. The antelopes are getting use to fewer rain drops every year. The birds in South Africa build gigantic nests, some of which are over 100 years old. Some desert plants live only a few months. A mother duck acts as if it is injured to distract a hyena from her little ducklings. The ostriches dance and attack in case of danger, while a little boar finally reunites with its lost family.

One of the most popular documentaries of its time, whose universal appeal surpassed its country of origin, "Animals Are Beautiful People" were especially critically acclaimed in its homeland South Africa while it was even awarded a Golden Globe as best documentary. Funny, cheerful, playful, suspenseful and touching, this documentary depicts various plant and animal life in Africa in an interesting way in order to show the miracles of nature - among them a fish which hides its breed in its own mouth from predators or a snake swallowing an egg - while director Jamie Uys abstains from his own ideas, except for the narrator, and lets the events unfold naturally, no matter what they are. Still, he made a few directorial interventions here and there, like the baboon sequence accompanied by Johannes Brahms' song "Hungarian Dance No. 5" or the blooming of the desert accompanied by Tchaikovsky's "The Nutcracker". It's also noticeable he was not all that objective, but actually manipulated the events at some moments: for instance, the seeds popping out of a plant were animated, not real, while the rain in one scene turns out to obviously be a water hose. Still, during his four years of shooting this film, Uys made a rather too cute, but sweet and easily accessible achievement suitable for all ages that stands the test of time.