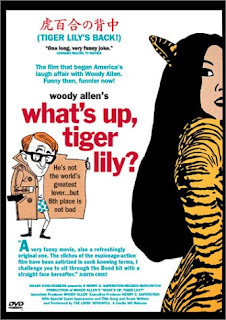 Woody Allen talks with a journalist and introduces "his" film to him, one of Japan's nonsensical crime films which he dubbed with new voices because the sound disappeared. The story: agent Moscowitz catches a killer who wanted to eliminate him in his room while his girlfriend was having a shower. Later on, Lily, a runaway criminal, enters Moscowitz's car and starts driving throwing out his girlfriend. In the apartment some people cause Moscowitz to fall unconscious and bring him to a sultan who plans to create a country somewhere in Europe but is threatened by a criminal who has a recipe for egg salad. Moscowitz saves Lily in a ship, gets the recipe and gets rid of the criminals. Allen observes a woman stripping.

Woody Allen's directorial debut "What's up, Tiger Lily?" is one of the most bizarre films of cinema: namely, he took a cheap trash film "Kokusai himitsu keisatsu: Kagi no kagi", threw out all the sound and then completely dubbed him in a humorous way. All those who regard Allen as a boring and too demanding filmmaker should definitely direct their attention towards his earlier films like "Lily" which is one of the funniest films of the 20th Century, a hilarious nonsensical cult parody that became also rather influential when one looks as many "wrong synchronisations" like "Kung Pow" or "Mystery Science Theater 3000" that also gained their humor on the contrast between actions and spoken words of the characters. "Lily" offers a couple of laugh-out-loud gags: a barmen gets bitten by a rooster on his hand yet still puts him in a cage together with a cobra and says: "This is the snake's first wedding night with him. Look at that passion!" while the two animals are frenetically fighting each other while a passerby is so "touched" that he even cries (!); after sleeping together the male hero says to the girl: "Thanks for cleaning up my sinuses" and to make everything even more weirder Allen is conducting an interview with a journalist and looking directly into the camera, while during the cast credits the titles just state: "Starring: a no star production". Truly an unusual experimental parody, yet somehow anecdotal, clumsy, too simple and in the oscillation of rhythm.