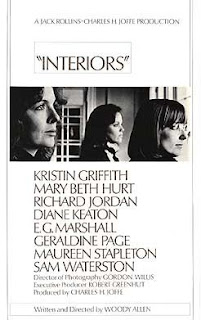 New York. The 63-year old Arthur announces he is separating from his wife Eve, which causes their three grown up daughters to fall into a crisis: Joey gives up her lecturing job and contemplates about abortion after finding out she is pregnant. Renata, a writer, enters a marital crisis when her husband, also a writer, regards himself as inferior compared to her. Flyn suddenly realizes her job as a TV actress leads to nowhere. Eve tries to commit suicide while Arthur returns with his new mistress, Pearl. When the two get married, Pearl runs of to the sea and drowns herself. The family mourns on the funeral.

In "Interiors", his most serious film without a single shred of humor, Woody Allen came the closest to making a drama in the finest manner of his idol I. Bergman, although he also succeeded in crafting a, for him, unusually strong, fierce and extroverted film, abandoning his long takes, but still remaining a static touch. Back in 1978, "Interiors" came as a hermetic surprise since Allen made a 180 degrees shift away from comedy and towards an absolutely serious divorce drama, so uncompromising and painfully bleak that it almost becomes "pessimistic to the point of negation", as states one of the characters in the film, but despite some flaws, like the fact that the intensity could have been stronger, he managed to direct it in a fine manner, delivering a quality film for the patient viewers - especially well in her role is Geraldine Page as the depressive Eve, who won a BAFTA as best supporting actress. To put it simple, it's an existentialist film about people who don't feel comfortable in the rift between their wishes and their reality they are living, thus the story is filled with 'dilemma' moments - Arthur announces he is going to get married again and Eve looses her patience, screams and throws some candles in the church on the floor; Eve tries to commit suicide with gas by blocking windows and the doors with the glue tape; Frederick tries to rape Flynn - all untypical situations from Allen, who wanted to get away from his style, and managed, even though many weren't ready for it.