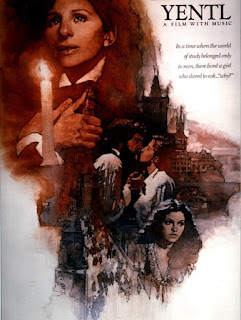 Eastern Europe, 1 9 0 4. Yentl is a young woman who is fed up with the discrimination of women by her Orthodox Jewish community. In her village, she is not even allowed to buy the Talmud without a man accompanying her. When her father dies, Yentl mourns for seven days and then decides to enlist at a Jewish religious school, yet even there, only men are allowed to study. Yentl thus decides to disguise herself as a man: she cuts her hair and presents herself as Anshel. She manages to enlist, but has to share her room with student Avigdor, in whom she falls in love with. He is engaged to the shy Hadass, but lost his honor since his brother committed suicide. Hadass is thus married to Yentl. Discomforted by the charade, Yentl finally admits to Avigdor that she is a woman. He stays with Hadass, whereas Yentl takes a ship to America.

Barbra Streisand fulfilled her dream project by taking on the leading role—and the directing position—in the feminist film adaptation of "Yentl" in which she plays a woman who disguises herself as a man. From today's perspective, "Yentl's" reputation is highly polarizing—the positive reviews complimented the film's message about emancipation of women, whereas the Golden Globes even awarded Streisand as best director, making her, almost congruently with the film's theme, the first woman to achieve this equal status once only held by men, but the negative reviews were also very loud, especially in the often spoofed "Papa Can You Hear Me?" song—yet in the end, it is a good and honest little film, despite some heavy handed or kitschy moments. The main problem is that Streisand is trying hard, but is never quite believable while playing a man, unlike her counterparts in "Tootsie" and "Victor/Victoria", both released the previous year, who achieved an almost fantastic gender transformation. The story sometimes traverses into a musical, which also seems forced at times and takes you out of the film, yet Streisand showed a surprisingly good sense for directing, conjuring up a cozy "Jewish mood" with measure, handling a critique of a rigid tradition just right. The best comic twist is the one in which Yentl is forced to marry a girl, Hadass, whereas her relatives tell Yentl they "expect grandchildren in nine months", so Yentl has to constantly find ways to postpone their first wedding night. Through the story, several gay themes are presented, but the main theme is still Yentl's quest to achieve her own dignity: as a man, she is finally given equality in the community, which announced a huge progress of women's rights in the 20th century.